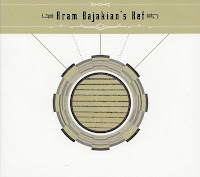 Picked by John Zorn for his new Spotlight series on Tzadic records, one suspects something interesting must be is going on with Aram Bajakian's trio. One spin of the Brooklyn based guitarists debut recording and these suspicions are confirmed. The songs on this album seductively, destructively and quite entertainingly blend passion, reverence and a little self-immolation. In the words of Zorn himself, "the music here rocks hard with exciting rhythms, searing guitar work and beautiful world music melodies, beautifully performed by a brilliant group of young lions."

Bajakian's choice instrumentation is slightly eclectic for a jazz group -- himself on acoustic and electric guitar, Tom Swafford on violin and Shanir Ezra Blumenkranz on acoustic bass, electric bass, oud, and gimbri -- but perfectly suited for the take on Armenian folk music that inspires and shapes both the music and the name of the group. Dialing up the snarl and twang, Bajakian's guitar brings some rock and good old NYC punk to the Middle Eastern themes. I hear echoes of Television and Ribot throughout, giving this recording a biting and satisfying edge.

Opening with 'Pear Tree', Bajakian spins a sensitive solo acoustic guitar piece that belies a classical grace and a hint of more exotic seasonings. Things really pick up on the next song, the ethnic rhythms support some sharp attacks as the driving theme gives way to some vicious improvisation between guitar and the violin. Proving mastery of the 'downtown' guitar solo implosion, Bajakian lets loose.

'Laz Bar' returns us back to stabler ground, the theme is folkier and gentler, but still insistent. However, along with then abandon, there are moments of restraint and beauty. The last three tunes, starting with 'Shish', seem almost like a suite. Fragile melodies intertwine with deliberate accompaniment, I even hear a hint of the Beatles in the brief '48 Days'. 'The Rota' is an lovely coda to the recording.

This is a very much a song driven affair. The improvisations are contained within the clever compositions, and the compositions are made of choice cuts of folk, jazz, and rock. To some degree I feel some kinship with the Cubano Postizos and Brad Shepik, Matt Kilmer and Peter Epstein's Lingua Franca, not so much in the actual tunes, but in the sensibilities and that certain sense of abandon and 'downtown' aesthetic. An album worth seeking out, and a musical vision with something going on.

I was in Pescara (italy) few days ago for Lou Reed's live. I heard this young and VERY talentes giutarist and was amazed by his tecnique and fine taste. When I saw him at the end of the concert he was standing near the T-shirt table and was selling this CD. I didn't think twice and bougt it. Now I'm listening to it for the first time and think it was a good purchase....really a good job.