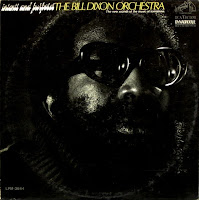 1967 was not only a fabulous year for rock music to mature out of rock 'n' roll*, it was also the year in which trumpeter Bill Dixon released his first masterpiece : "Intents & Purposes", an ambitious piece of music with jazz instrumentation and improvisation, but with compositions closer to modern classical music, and with harmonies and musical development all Dixon's own. The musical vision was quite unique : slow, dark, foreboding, compelling, with sudden outbursts of the solo instruments, especially then Dixon's trumpet.

In the years leading up to 1967, John Coltrane, Ornette Coleman, Albert Ayler and Miles Davis had already started to bring artistic maturity to jazz, like some of history's rock icons did in 1967, extracting the genre from the entertainment context from which it developed, but Dixon's "Intents & Purposes" marks a major milestone, creating a bifurcation in the paths of jazz that has not had many followers. True, many ambitious orchestral jazz compositions were created over the decades, but none had the exceptional power or vision of Dixon's music. Neither did they have the quality and authenticity. We had to wait for fourty years until Dixon himself and the courage of some record labels like AUM Fidelity and Firehouse 12 brought us the logical sequels. And now Victo.

"Intents & Purposes" has been re-issued and is of course superhighly recommended. And without a doubt the most worthwhile re-issue of the year. But that is not all .... 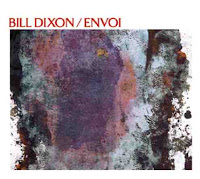 It is really hard to believe, but after Dixon's masterpiece, no albums of his were released until the early 80s, and then primarily, yet also highly recommendable, small ensemble pieces : from duets to quartets, most of them equally easy to recommend.

We find him back with a large ensemble in 2008, with "Darfur : 17 Musicians In Search Of A Sound", a musical statement for the people of Sudan, devastating and powerful.

In June of last year, Bill Dixon passed away at the age of 84, and his band performed a month before at the Festival International de Musique Actuelle in Victoriaville, Canada, a last performance. We find this performance on "Envoi', yet again a magnificent record.

A composition and performance that is so majestic that we can only deplore the fact that Dixon is no longer with us, and that he did not get the chance to record as much for larger bands. The musicians are the same as on "Tapestries For Small Orchestra", released in 2009, and also highly recommended : Bill Dixon on trumpet, Graham Haynes, Rob Mazurek, Stephen Haynes, Taylor Ho Bynum on cornet and flugelhorn, Glynis Loman on cello, Michel Côtè on contrabass clarinet, Ken Filiano on double bass, and Warren Smith on vibes and percussion.

The album is again of the same high level, continuing the musical vision that started in 1967, again drawing a dark and ominous landscape, in which the harmonies evolve around stillness and calm whether as an expression of resignation of a calamitic scale or fear that it might still come, you will never know**. The end result is absolutely magnificent, with musicians who understand the music fully, demonstrate incredible control and coherence in bringing Dixon's vision to life.

Occasionally, single or multiple voices erupt, in wild exclamations, or rarely, solo, in soft lyrical phrases of hope. At other times, the dark cello tones, the percussive mayhem evoke catastrophic and dramatic images, but never for long, as the slow silence and harmonised horns continue their contrapuntal lament, gradually expanding, glorious sometimes, of an extreme beauty and refinement.

What Dixon achieved is beyond current recognition. These are works that can stand the comparison with Bach and Beethoven, yet with the expressive power and emotional weight of jazz.

After two long tracks, the album ends with some words by Bill Dixon to thank the audience : "It is not so easy trying to attempt doing what you wanted to do ... in front of people who know what they would like for you to do ...  so ... one does one's best, always .... and one hopes for the best ... always. I thank you".

We, listeners, can only be glad, that we got to know his music so much better in the past few years with these fantastic recordings.

** Again, my lack of English vocabulary limits the accurate description. In Dutch I would use words like : "meeslepend", "opzwepend", "onderhuidse spanning", "indringend", words for which I can't find the translations.

I agree with you - Bill Dixon's music is a towering achievement.

I discovered his music through the Soul Note releases - the first one was "Son of Sysiphus".

He is surely on a par with John Coltrane, Ornette Coleman, Cecil Taylor, Albert Ayler and the musicians of the AACM (Braxton, Abrams, Mitchell...)as one of the fathers of the music commonly called Free Jazz.

Although I have the LP "Intents and Purposes" since ten years I have bought the CD reissue.
A high quality re-release with excellent sound and a lovely replica of the first-pressing cover.

Haven't yet heard "Envoi" - looking forward to hear what is surely another master piece from a still underrecognized master of 20th music.

His legacy has yet to be understood by most of the listeners and musicians alike.

There are socalled reference books about Jazz or music in general where he isn't even mentioned!!

Thanks for your slowly burning review - as always!