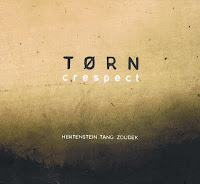 This German piano trio is bookended by two compositions by one of the great ladies of modern jazz, Carla Bley, starting with "Batterie" from the 1964 Paul Bley album Barrage. And this is not surprising, since "batterie" is the French word for drums, and this trio is led by drummer Joe Hertenstein, with Achim Tang on bass and Philip Zoubek on piano.

Surprisingly enough, the Bley compositions are the ones with the most recognisable theme, and sound also as the most accessible. Gradually, and especially with "Flaps", we enter into a different world, one that is more unreal, or is it surreal, with still very jazzy sounds, but eery, sweet, but alienating.

The piano is without a doubt the lead instrument, but the strong cohesiveness, and the incredibly precise playing by Hertenstein and Tang give the pieces a common sound. Listen to the beautiful "Prag", with its uncanny slow and hesitating development, with bass and drums coloring the sparse touches on the keyboard, full of melancholy and distress at the same time. At the center of the album, we find two short pieces : "HK3" and "The Grips", bringing only extended techniques, then moving back seamlessly into Zoubek's "Subminus", a kind of mirror-image of "Prag", equally slow and exceptionally beautiful.

The "pièce de résistance" of the album is Hertenstein's "Crespect", on which the musicians' strong sense of pace and control is at its best, shifting through a kaleidoscope of subtle rhythm and stylistic changes.

I will not review each piece, but you get the gist : this is very refined and carefully crafted music, taking the traditional jazz trio a step further, developing a great and coherent musical unity in the process, accessible and quite eery an mysterious at the same time.