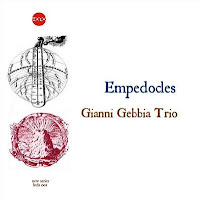 Italian altoist Gianni Gebbia has developed his own kind of musical journey in the past decades, exploring the stylistic subgenres of jazz, from traditional over meditative or modern funkish to world jazz and world folk and avant-garde, yet always with a great sense of taste and authenticity, and with a story to tell. On "Empedocles", he is joined by Stefano Senni on bass and Francesco Cusa on drums, a fantastic rhythm section.

Upon first hearing, you can hear the legacy of the greats of modern jazz : Charlie Haden, Billy Higgins, Ed Blackwell come to mind when I first heard the rhythm section : warm, with great pulse and inventiveness, yet free too.

Gebbia turns into his most playful element, using his warm and soaring approach for tunes of absolute joy, sometimes quite simple in their foundation, but so much fun, and so well developed that the listener gets easily in the same mood of pure musical enjoyment.

The long "Zoogony" is the centerpiece of the album, mid-tempo, with slow and somewhat jubilant sax phrases being propulsed forward by a wonderful hypnotic rhythm, underpinning Gebbia's further development of changing moods, weeping, then it becomes boppish like hell, then slowing down again and picking up from the beginning, increasing the tempo for a majestic finale in which all three musicians let go the brakes and just go for it.

You get a solo improvisation by Senni, a mambo even, the Charlie Haden composition "Song For Che", and a long "Blues For Aldo" to end the album, with some Ornette Colemand phrases included (that being said, Gebbia's sax-playing is by far superior to Coleman's, both in tone, expressivity and lyricism).

The album brings nothing new, nothing world-shocking, or even memorable in the totality of things that are being produced, including other material by Gebbia, but the result of the album is so good, played with so much skill and heart, and such a lack of pretense, that I can only recommend it.

The joy of jazz!