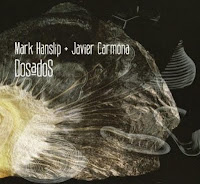 Mark Hanslip is a name that appears regularly along with Mark Sanders, Paul Dunmall, Mike Hurley, the excellent trio with Olie Brice and Tony Marsh 'Tom-Mix', and also more recently the splendid Twelves 'Adding Machine', reviewed here in March 2011. Along with colleague Javier Carmona, another mainstay of the lively UK free scene, the two have been working towards this CD, a much anticipated set of duets, the fruit of regular duo gigs and sessions throughout the past years. A duo recording is certainly a brave step for any improvising musician to take, John Coltrane's Interstellar Space (maybe the first sax/drums duo album) has been followed by the pairings of Jackie McLean and Michael Garvin, Anthony Braxton/Max Roach, Archie Shepp/Max Roach, David Murray/Kahil el Zabar or Evan Parker/Tony Oxley etc, it's a difficult area in which to work and certainly not very 'user friendly' when selling albums! On this CD outing Hanslip and Carmona have taken a similar direction to Coltrane - i.e. they 'almost' play it straight, working more on lines and rhythms as a focal point.

In fact the first word that came to mind on hearing this CD was 'pointillism' - a method developed by some impressionist painters. The two instruments work together, splattering (or is that spraying) notes and beats onto the sonic landscape. The attention taken over details by the drums/percussion is refreshing, no notes are wasted and space and dynamics play an important role. The sax takes just the right balance between lines and sound, sometimes integrating subtle multi-phonics as in 'ffs' then later letting the notes create intense free flowing melodies. 'Preamblo to Nipple 2' seems to have a theme but quickly dissolves into an exciting and detailed dialogue between the two players. 'Mucha Mierda' builds little points of sax and drums, dabbed onto the canvas building into an intense free wheeling improvisation. Much of the work here could be re-titled using painters and painting from American artists such as Jasper Johns, Brigit Riley and Jackson Pollock. Track 11 - 'Jowls, and a Beard' is maybe what a Jackson Pollock painting would sound like ... if they could speak! The track starts delicately, carefully placing notes and beats until the music takes it's own direction, an almost Zen Archery approach?

These are just ways to describe music which for me strongly conjures up images that are often abstract, but never without direction. The album is certainly an intense listen, not a bad sign in this day and age. The music is never short of invention, it's atmospheric, colourful, full and yet has space, and actually it's all quite approachable. One hopes that the duo will continue to develop especially if the results of this first recording are a peek into the window of the future.

Note : The CD was originally released a few months ago, withdrawn and then rescheduled for release at a later date so we suggest you contact Mark Hanslip directly at markhanslip79@gmail.com for more information.