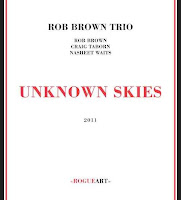 'Unknown Skies' posseses an intriguing quality: it seems to be precisely imprecise, the strength of its cohesion built upon the tensions of it coming apart. Song heads could almost be improvisations, they seem so naturally unfolding, yet unison accompaniment belies their composition. Rhythms unfold loosely yet totally in control, and it makes for quite a masterful mix.

Rob Brown's alto sax is in command here, it both soars and digs deep, beckoning you to follow but also suggesting that you may want to stand back from time to time. Craig Taborn's acoustic piano veers expertly both inside and outside the lines, supporting Brown, but also cutting free like on his angular and intense solo on the opening tune 'A Fine Line'. In fact, this track on the whole is an exciting statement that serves as a harbinger for the rest of the concert recording.

Throughout, Nasheet Wait's drumming is fantastic. Whether it is his kinetic intro to the album or providing urgent counterbalance to Brown's unbound solo on 'Bounce Back', the drumming is energetic and loose but detailed in the right places.

Though I had read of Brown before, I had not heard any recordings. Thus, while I cannot say how this recording relates to his discography, it seems like a fine introduction to my ears. His tone is evocative, full of bite, passion and melody. The tunes, while grounded (though bass-less) are not afraid to break free of their moorings and take the listener with them (but, you'll be pleased to know they return you safely - albeit a little roughed up - too). And througout the recording, the energy level is high. In my humble opinion, this is some good stuff.