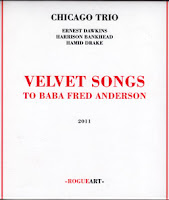 The Chicago Trio is Ernest Dawkins on sax, Harrison Bankhead on bass and cello, and Hamid Drake on drums and frame drum. The double CD presents a live gig performed a year before Fred Anderson passed away, yet even then, the performance was already a tribute to him. Both Bankhead and Drake played a lot with the legendary Chicagoan and owner of the Velvet Lounge, and although Dawkins and Anderson also performed together, to my knowledge none of that is available on record.

In any event, this album is really excellent: a deep dive into jazz history by one of the best sax trios you can find, with Drake offering all kinds of rhythmic playfulness, ranging from a funky "When The Saints Go Marchin' In" with Dawkins on two saxes, reggae on "Jah Music", to weird modern work-outs on "Galaxies Beyond". As I told Drake once, his playing sounds like dancing in paradise, and that's also the case on this album. Bankhead is phenomenal too, also on cello on what is possibly the best track of the album, the long "Moi Trè Gran Garçon". The precision of his tone, including bowed, is fantastic, as are his improvisations.

Dawkins is an ensemble man, and it must be said that he give the trio lots of space, yet he is a great front man, very lyrical and melodic, also in his improvisations, with jazz and blues tradition never far away, yet sufficiently free in his approach to make this album an easy one to recommend for readers of this blog, moving listeners from joy to sadness to spirituality to world empathy and back. The kind of free jazz Baba Fred Anderson would have enjoyed. A great tribute to a great musician. 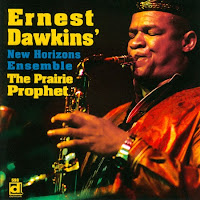 Ernest Dawkins released another album this year with his New Horizons Ensemble, with Jeff Parker on guitar, Steve Berry on trombone, Shaun Johnson and Marquis Hill on trumpet, Junius Paul on bass, and Isaiah Spencer on drums. A nice boppish album, with good playing yet a little too laid-back to be memorable. His "Mean Ameen" album is highly recommended for those among you who do not know the band.