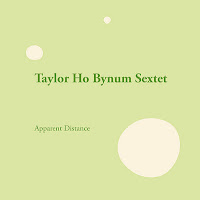 Life is too long to spend it comparing one bands boom-chicka-boom with another's, especially when the joy of improvised music stems from the truth that boom-chicka-boom need never be revisited ever, ever again. That said, The Taylor Ho Bynum sextet has no problem grabbing the keys and taking the symmetrically rhythmic nostalgia mobile for a brisk joy ride. In so doing, it becomes obvious and official, Thomas Fujiwara is one motherfucker of a drummer.

Listening to Bynum on Apparent Distance it is readily apparent to whom the aesthetic debt is owed. That debt is never musically denied and, at the same time, is a solid reference point against which Bynum can leverage his own musical ideas. Little fanfare surrounds it, and it never gets in the way. With Vandermark, much is made by Vandermark of Vandermark crediting when credit is due, and yet there is nothing to suggest the loan did any good; after all is said and done, Vandermark sounds like Vandermark—whoever that is (think all the colors in the crayon box melted into a gray, tan hue).

If that's what they call Postmodernism, does anyone have any idea what comes after that, and when it's going to be here? Bynum sounds like Dixon and, also, plays phrases that Dixon wouldn't play in a million, billion years—and that is why there is no confusing Bynum for Dixon. While this likely sounds like judgment, no judgment is implied, but rather an accounting for Bynum's time with Dixon, who's influence as one of the great geniuses of both the trumpet and of music is substantial. There would be a problem if Bynum didn't, on occasion, sound like Dixon.

Jim Hobbs is a rudder of reality, bringing us back to the now when the groove gets a little to slick. Hobbs is pani cà meusa in an Olive Garden ™ world. Hobbs is a mighty force of propulsion, with lines that race through, between, on top of and around those moments of metric predictability. Hobbs is an asset. Like Jeb Bishop, Bill Lowe reminds us of the glory that is the trombone. Lowe favors the intricate and involved over Jeb Bishop's grand, sprawling gestures. Both are consummate musicians lending both their virtuosity as soloists as well as a solidity of sound to the ensemble.

Mary Halvorson is another standout, particularly her use of her “wiggly pedal” or “foot whammy bar” or what ever it's called. The ability to leave the tempered scale be it mechanically or electronically is the best thing that happened to the guitar since the Marshall Stack. Halvorson's use of this pitch changing device is signature and wildly effective. It's probably impertinent to say without said pitch shifter, Apparent Distance would have been an all too familiar sausage party of super jazz chops on the free jazz tip, but if that's what it takes to underscore the profundity of Halvorson's contributions then so be it.

Even if all else preceding is for naught, the whole listening experience is handsomely redeemed in the final minute of Layers, the final track on the recording.