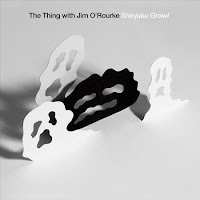 "If not ecstatic, we replay." An interesting statement and quite a kick-off to the Shinjuku Growl, a recent offering by The Thing with guest guitarist Jim O'Rourke. There is no need for a replay, from humble rattling percussive sounds punctuated by choice blasts from the sax, to the noisy improv that wells up between O'Rourke and drummer Paal Nilssen-Love, it all leads up to Mats Gustafsson's snarling, bleeding improv a third of the way into the 22 minute improvisation.

Bassist Ingebrigt Håker Flaten pushes and Nilssen-Love prods until there is almost nowhere left to go. It's a huge sound, it's not always a pretty sound, but it is ecstatic. With four minutes left to go, the energy and volume turns down - rather - the volume turns down - and the energy transform into tension and the restraint is nearly as fiery as the previous onslaught.

"Half A Dog Can't Even Take A Shit" is another powerful foray, however the textures are different this time as Gustafsson's sound is multiphonic and intense, but O'Rourke's guitar provides almost subtle counterpoint. I do need to qualify 'almost subtle', because it is still loud, abrasive and fantastic but it couples so tightly and supportive of the sax thats it almost seems like Gustafsson is playing both instruments.

What's interesting is that each improvisation have some sort of implicit structure, almost like they rise up, layer by layer. For example, the title track starts out with a classic free jazz feel, Gustafsson blowing with a clear tone and the rhythm section propelling it along. Then, coming in gently at first, the guitar's sandpaper smears begins egging on the sax and the sound and tension begins to build. The approach is like a digestive aid for the rich and tough music they are serving up.

Shinjuku Growl is a companion piece to the previously released Shinjuku Crawl with Otomo Yoshihide on guitar. Both were recorded live in 2008 in Japan. The Thing's discography is filled with uncompromising music and excellent collaborations. The addition of avant rock guitarist O'Rourke is a masterful addition to the list.

The Thing played our Jazz Festival this year, and were the highlight. I'm imagining them with a guitar added, yeah, I'll be getting this one.

I really like your description of the "half a dog" song.

Thanks for the note. I bet that the show was pretty powerful. Where is your festival?