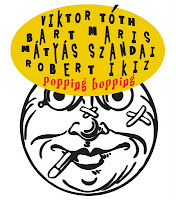 My initial foray into the world of Viktor Tóth started with Climbing With Mountains - a result of the review by Stef here and the generosity of the folks out at BMC records (who due to the non-availability of pay-pal sent me the CD as a gift item, a real treat!). I definitely enjoyed that release and I took to this one with a lot of interest and hope. The album has Viktor Tóth (alto saxophone) and Bart Maris (trumpet, effects) with the rhythm section being handled by Mátyás Szandai (double bass) and Robert Mehmet Ikiz (drums). There is also László Válik who is credited with mixing and live effects; he does the honors for recording this live concert at the Jazzforum Budapest.

Firstly - the musicians are all of a very high caliber, extremely accomplished in their respective departments with the performances being stellar. I would like to make a special mention about the rhythm section - it is top notch, throbbing and pulsating it proves to be a delightful and potent backdrop for the musical explorations that this group engages in. I always seem to have a special yardstick I apply for the rhythm section for I believe that it is such a critical component for such adventurous music - hence the special mention.

Not to forget Viktor who really revels in his role as the leader making his alto sing and swing. Here below is my listening experience which I hope gives an insight into what I felt about the music. First listen: The former part of the album was ablaze and riveting, makes you close your eyes and drench yourself in its offering. Second listen: Once again the former part of the album establishes itself firmly in my mind. The third track takes the "my favourite" spot - it is so filled with moods, playful at times but brooding at others - it was like a drama unfolding on stage except that there is no visual component, its an absolute peach of a track.

The title which I think is an oxy-moronic play on weather-temperature combinations gives an idea of the extremes this one song takes - sunny, humid and I think an array of other “climates” inhabit this 15 minute song. Another fact worth mentioning here - Mehmet is on fire in this track, for a minute I was left wondering if Neil Peart had entered the realm of jazz and was bringing his rock drumming over. Third listen: A Ballad for White Flowers - upon listening a little more closely to this track, I checked out the name of the song and I broke into a smile. For it is a befitting composition - an almost melancholic track that still ends up uplifting you, it is a fantastic composition.

Fourth listen: The first two tracks serves as a perfect vehicle for the instrumental exploits that these guys are capable of, they are strong cuts but they are probably not as adventurous as the tracks that follow. But even this time around, Hong Kong and Star' Stairs failed to hold my attention - I am still wondering why. Don't get me wrong, its not like they are dull - they still have a lot of energy and the playing is great but I guess the best way of putting it is that it pales in comparison to the rest of the album. Overall I found this outing fantastic - it is recommended solely for the extremely strong opening 4 tracks.

Even though the compositional artistry is missing in the latter half of the album, the instrumental prowess of this band is evident throughout and keeps you well engaged for the 50 minute ride. Popping Bopping - hopping, flopping, whooping, whopping treat indeed!