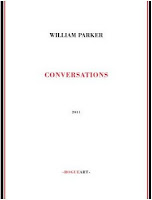 The concept is straight forward—recorded conversations (soliloquies, really) interspersed with William Parker on bass. Both the conversations and the bass interludes are short. Unfortunately, here at Freejazz-stef, we writers don't get the actual CD. In that instance, I don't know who all the conversations are with. I do know for certain, however, that one is with Onisegun Milford Graves. Graves: “The musicians job: we are receptors of vibration” That conversation is worth the price of the CD. Parker's bass playing is as luminescent as ever.

Perhaps you don't speak English and so aren't as interested in the spoken word parts? Hearing Parker crystallize his aesthetic into such short spans makes this a must hear for all bassists as well as those interested in one of the greatest bassists the instrument will ever know. It is also an occasion to become acquainted with Parker's antecedents and those who he cared enough to document himself. If I had to pick the theme of the narrative thread linking all the conversations together, I wouldn't pick a will to please the parent culture.


PS from Stef : here is the list of interviewees :