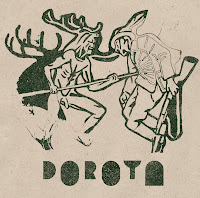 The first thing I happened to do before reviewing this album was to pump the internet for some background information but I was unable to find anything (not in English, at least!). Therefore I was very thankful for the small "dorota-eng" document that came with the album - it led me to a S10 records which again resulted with zilch on the internet but for a face book page which stated that the hometown was Budapest and the genres they dealt in were Hip/Hop, Electronica and Funk. What??! Wondering how this record made its way for review under this site, I hit the play button with a mix of anticipation and trepidation.

How does one review an album where there is no framework, no standards followed, no genre adhered too? Free - free to improvise, free to ignore norms, free to explore the unexplored, free to create - that is the one underlying theme this album overstates !! The opening track is one man moaning (I assume something in Hungarian) for more than a minute with some percussive effects and strained string-plucking in the background. Just when your eyebrows are at their top-most in bewilderment the second track opens up as a scorching straight out rock jam that would not be too alien in a Joe Satriani or Steve Vai album - this is a high energy track showcasing the writing skills of the band. Next up is a track that is more of an interlude lasting just under a minute with some simple guitar plucking but it segues beautifully into another post-rock jam (think Mogwai here) halfway through which you are treated to some more vocals and some riffs that reeks "classical" (semi-Indian almost!) - by now my eyes are wide quite astonished with the versatility behind what I was listening to.

To give you a sample of the diversity that follows - track 6 would fit snugly into western movie soundtrack (even the vocals in this track jibes with that feel) while track 9 is sure to remind you of your hard-rock-led-zeppelin-jam days. To add more flavours track 10 sounds like Sunn O))) indulging in their doom laden sound while track 11 could easily be one of the pieces that would adorn the soundtrack of Quentin Tarantino's Kill Bill (think Kiddo vs O-Ren at the Tokyo nightclub). That should tell you what this 50 odd minute musical journey is all about. Amidst all these are the little nuances thrown in by the band - the odd dissonant chord from the guitar, the rhythm section out on a odd-metered wild improv with the guitar wailing out its own solo not to mention some really weird vocals (track 8 and 9 are prime examples consisting of all of these, also the longest tracks on the album). It would be ideal, I think, to now introduce the brains behind all this - Makkai Dan on bass, Porteleki Áron wielding the drums and Somló Dávid fretting the guitar - I think these are musicians who understand each other and love playing off each other, they are such a tight-knit unit who seem to know as a whole, the parts and the sum of the parts they want to create.

Easily my most adventurous listen in a very long time, one thing is for sure - this is not free jazz, this is not even jazz. This is the just three musicians who seem to have an open mind enjoying themselves exploring, musicians who believe that music is a potent vehicle for communication that transcends the spoken or written. This is just pure fun but with a lot of effort to make true its creation. To the die-hards, yes - this review probably does not belong here but to all those adventurous listeners who believe that the journey is far more relevant than the destination - I will invite you to get on board the Dorota express, it is a journey that you are not going to forget that easily.

(I have refrained from 'star-ing' this album because this music is not strictly in the vein of what this blog deals in. However I still felt the need to expose this music to the readers of this blog for I think that the spirit behind the making of such music is very relevant to what is usually dealt with here, it would be very interesting to see where the band heads on to next.)

Thanks for reviewing and posting this one! Really adventurous, hard to classify band. Excellent!

Hi everyone! i've got their cd! The whole cd is an art. The cover,the booklet and the music on the disc. The music is miracle. Once a time I can made a tape record in a smoky club, and now is one of my favourite treasure from the band. Get the CD, its not too expensive cca. 10USD. Theese guys know something from the heart of Europe. http://dorota.hu/album

Not really what I expected reading this review and not that adventurous either. But thanks for bringing it up here - considering the nice cover art - I will order it.