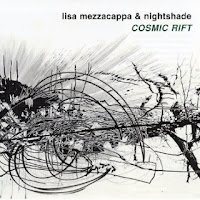 Ambience is to the fore on Lisa Mezzacappa and Nightshade's album Cosmic Rift. Built upon electric/acoustic soundscapes, the focus in on interactions and textures rather than strong rhythms and striking themes.

The album has been sitting in my iPod for quite a while now, slowly gaining my attention and surprising me each time I give it a listen. I am finding it an entirely different approach than some of the other groups I'v heard from the bassist. For example, Cylinder, reviewed here, drew upon connections to Coleman and Dolphy with its upbeat interlocking melodies. Another group, Bait & Switch, reviewed here as well, was a more jazz-rock oriented affair.

The music on Cosmic Rift strikes an intriguing balance. Tim Perkin's electronics and the other musicians' extended instrumental techniques are as important components of the sound as the rhythmic and melodic lines. Yet, while the sonic textures are a main feature, there is still a big role for the melodies woven throughout.

During the first song, 'Cosmic Rift (prelude)', Kjell Nordeson's vibraphone intertwines with the bass and percussive voices, while clainetist Cory Wright spins a long free form melody that slowly builds to a satisfying climax. On 'Delphinius', John Finkbeiner's guitar threads its way through a thicket of syncopation and texture. Soon a melancholic melody appears which weaves in and out of sync with the woodwind. The Frank Zappa penned 'The Eric Dolphy Memorial BBQ' is a captivating re-working of the tune. Starting off with bass clarinet delivering the melody over an insistent bass line, it is punctuated with all sort of sound effects and percussion, then halfway through it coalesces around Finkbeiner's guitar, building into an off-kilter groove.

While this album took a little while for me to get into, I'm finding it to be as engaging, albeit in a different way, than the aforementioned recordings. The nuanced interactions, melodic juxtapositions and subtle electronics present a new sound that slowly intrigues and captivates.