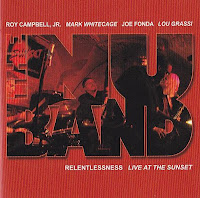 
Their first album, "Live At The Bop Shop" was released before I started with this blog, it was followed by "The Nu Band Live" (also at the Bop Shop), "The Nu Band Live in Paris", "The Dope And The Ghost" (Live In Vienna)  and "Lower East Side Blues".


Each album received a high rating, each album was is also recorded live (except for "Lower East Side Blues"). The band is Roy Campbell on trumpet and flute, Mark Whitecage on sax, Joe Fonda on bass and Lou Grassi on drums, all musicians with an incredible track record.

Musically, there is nothing new though, as they have been playing the same language for the last ten years, yet it is so powerfull, so lyrical, so emotional, so cleverly executed, with precision, and adventure, and openness, and with such an incredible respect and understanding for each other, that each nu album is a nu treat.

Sit back and enjoy!