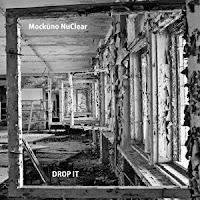 
Anyone who reads my reviews on here will know that I really like improvised music and in particular when it embraces written elements - ex : Atomic, Motif, The Engines, Ken Vandemark etc. That's maybe a contradiction in words - written and improvised - but the idea that the two can possibly cohabit the same space (musically) does lead to new ideas and colourful music (*). Mockuno NuClear fall into this category sitting somewhere in-between the two ideas, trying to please both camps at the same time.

This is a record which at the beginning shines like a bright star. The music is wonderfully played and (as mentioned) slides between the composed and the improvised with great ease. Saxophonist Liudas Mockunas plays some fantastic lines on the opening tracks which glide gracefully into semi romantic classical themes with the piano. It's not really clear if Prelude (Tk1) and Prelude Variation (Tk2), or Tk3, The Cursed (Prelude Variation) are actually linked musically, although one doesn't have to worry too much as these three tracks clearly hold together as one idea. In fact after hearing these three pieces I was very excited to hear what the rest of the record would reveal.

(What follows) .... after the opening pieces the record almost splits into two areas, something that I hadn't counted on, and certainly not hinted at the beginning. Tracks 1, 2, 3, 5 and 8 are loose yet intimate pieces working round a more acoustic ethic, whilst tracks 4, 6 and 7 seem to be another group (although not necessarily different musicians) leaning towards groove based improvisations. Elephant Tango (Tk6) is a lovely theme, an almost semi pastiche of a tango style which bursts with energy yet seems totally out of place on the record. Track 4 - The Dark Side/The Bright Side (The Bright Side is dedicated to Andrew Hill) is another hard blowing tune, something one could imagine Matts Gustafsson playing with complete abandon. Here the group rocks away with Rhodes piano, grooving drum and bass riffing away and baritone sax in full attack mode! Great stuff I can assure you, but again a little unexpected.

Finally, it's this conflictual aspect which is slightly off putting as there are several records here, all probably very good. What is audibly an excellent group with some very positive and good musical ideas seems to not really know which side to express first, in fact putting all this into one record leaves the listener confused as to when best to listen to this record. Having said that I think anyone who is curious will probably find much of interest and will also be rewarded on repeated listens. I suspect that the group seen live would be very compelling, let's hope that the next record will clarify some of their very exciting ideas.
Personnel: Liudas Mockunas: soprano, tenor and baritone saxophones; Dmitrij Golovanov: piano and keyboards; Marijus Aleksa: drums; Vytis Nivinskas: bass (5, 6); Darius Rudis: drums (7).

(*) = The other possibility being totally improvised, or of course the more traditional 'theme' with identifiable chord progressions used as an improvisational vehicle.

Whoops, there was an error, I used an old template with 5 stars in it unfortunately I only gave it three stars! Sorry to build up hopes, but if you read the review you'll understand why I only give it ***.

Out of interest the 5 stars is what I started out from whilst listening to the album, which shows my thought process. The more I listened the album (and the musicians) I realised that it has great potential, but the content of the album is a little diffuse for my liking - just my own opinion of course. This meant that as a whole the album rated less. However, each of the tracks had many good things.

It's about time to stop rating the albums. Simple reviews are quite enough. You can't star this music

In fact if you look around the blog we stopped giving albums stars and everybody wrote to ask why no stars. So, we just put them back up again. We constantly insist that the best thing is to read the review, and not to worry too much about the star rating. However, it has it's use at times.