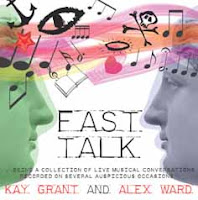 I haven't got any information on this one so I did a quick scout round the net to find out a few details. It seems that this is a collection of 8 live tracks taken from various concert performances and 2 extra tracks which were recorded in the studio, bringing a total of ten wonderfully detailed improvisations. On a couple of the tracks - three I think - the duetting couple added some electronics to their instruments which adds another dimension to the music.

If you don't know who Ward or Grant are you'll be in for a real surprise (and a good one) as this is not only creative improvisation, but also great fun to listen to. The voice of Kay Grant and clarinet of Alex Ward run playful circles around each other's ideas constantly inspiring the other to new heights. In fact it can't get much more fun than this, the two instruments of voice and clarinet match each other perfectly and one hears how when one person moves towards an idea the other follows within a matter of milliseconds either copying or complimenting. In fact they should (could) have called the record 'twins' or even 'old couple', as they seem to think alike, anticipating or finishing each others ideas and thoughts - uncanny!

I could give individual descriptions for the ten tracks but I think there's really no point, the titles are just here (I imagine) to give the listener an idea of which track is which. Each track is full of ideas such as trills, shrieks, flutter tonguing, laughing, crying, not to mention the pure melodic content ... singing and playing. Yes, it's all here you just have to hit play and sit back and enjoy. As for the tracks where there's a use of (very simple) effects - one should not think of laptop manipulations -  it's really just small flourishes which (if you're not careful) fly past you before you realize. These tracks come across well, but are certainly not essential neither adding (or subtracting) anything to the music. However, it seems obvious that there's plenty of room for another record which maybe investigates this area in greater depth.

Very nice record, certainly for all fans of pure improvisation.