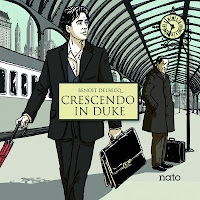 Crescendo in Duke is jarring. Not in a ridiculous or repellant kind of way— after all, it’s a collection of Duke Ellington compositions. Safe enough. It’s of the high quality usually associated with French pianist Benoît Delbecq, too.  It’s just that it’s so straight-ahead, it’s all but unrecognizable as a Delbecq album.

Delbecq’s made a name for himself with his prepared piano, creating a catalog of unorthodox jazz that can easily silence any grumblings about the gimmicky nature of mucking around the inside of a piano. But aside from a loop that underlies “Portrait of Wellman Braud” and a quirky take on “Whirlpool,” there’s not much of that here. Just the usual big band business with a more modestly-sized band.

Well, two bands to be exact. Delbecq fashioned two groups to tackle his Ellington homage: a small group in Meudon featuring Tony Coe, Tony Malaby, and Antonin Tri-Hoang on reeds, and the excellent rhythm section of bassist Jean-Jacques Avenel and drummer Steve Argüelles, and a Minneapolis-based group with the Hornheads quintet, bassist Yohannes Tona, and drummer Michael Bland. The French cast doesn’t veer far from the lead sheets, as though they’re lightly treading on sacred ground. The album’s climax, Ellington’s lengthy “Diminuendo and Crescendo in Blue,” is an enjoyable, competent reading, but it seems as though the group is consciously avoiding any comparisons to what went down in Newport in ’56.  The American group is loud and funky, and the strutting rhythm section breathes new life into some of these pieces, most notably opener “Bateau.” Yet somehow, the drums in “Blue Pepper” still aren’t as funky Rufus Jones’ on Far East Suite, and the woozy take on “Acht O’Clock Rock” has none of the hard-to-place urgency of the original.

If I sound dour about Crescendo in Duke, it’s not because it’s a poor showing. The musicianship is as sterling as the line-up suggests. It’s just that the sound is so polished, so sweetly referential of Ellington’s classics, it becomes hard to see the edgy excitement that’s a hallmark of these musicians’ own projects. Still, there’s plenty to settle in with: a great rendition of the full “Goutlas Suite,” pared-down versions of “The Spring” and “Fontainebleau Forest,” and a salsa-tinged trio take of “Tina.” Every musician was inspired by some great music-maker before them, and Ellington’s influence is resounding even in the 21st century. Crescendo in Duke is a nice tip-of-the-hat. But after a quick look back, now it’s time to keep pushing forward.

Check out the Meudon group in the studio in this “behind the scenes” video:

From looking at the video (which only has the sound of the recording .... not what you see), it seems the big question is ; what's the point?

I've found the Benoit Delbecq makes great music in general. I'm a little perplexed that he gets in a stellar crew like this and then doesn't let them do what they do best, play jazz! Tony Coe and Tony Malaby duetting would of been a nice treat for the ears.

I was also a little surprised by the music here. Anyway, lots of other stuff by Delbecq that's worth checking out.

Yeah, it's a curious album. I didn't want to give it too low of a rating, because it's not bad by any stretch of the imagination--just not what one would expect.

Everyone was kept on a very short leash, and it suffered for that, I think.

The solo piano stint on The Spring is nice though, with light touches of the Benoît Delbecq we know, that tinkling echo, tape effects and so on