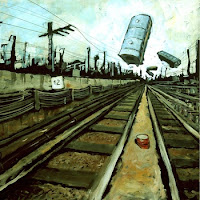 The first thing that strikes you is the cover by Benjamin Flao. Drawn in the tradition of Japanese mangas four train wagons are flying through the air like toys, coming straight at you. There has obviously been an explosion, maybe a terrorist attack. The place reminds of the suburbs of an Asian metropolis like Mumbai or Ho Chi Minh City. A record with such a cover could be interesting.

The second thing is the breakbeat in the first track Il l’a fait avec sa soeur. It comes totally surprising and it is laid over the saxophone and an extremely distorted bass. Already here the references of the music are proudly displayed in the sunlight: London based drum and bass sounds of the late 1990s (remember Goldie and Roni Size?), heavy rock á la early Soundgarden, John Zorn’s Naked City and his soundtrack albums, Giora Feidman’s klezmer, Johann Sebastian Bach, and Prog Rock the way bands like Rush played it. Amazingly you find everything in one track as if all these people were composing and playing together.

In fact it is a really young French band from Lyon we are listening to: CHROMB! is Camille Durieux (keyboards, piano, electronics), Guillaume Gestin (drums), Lucas Hercberg (bass, electronics), and Antoine Mermet (alto sax, electronics, vocals) and – at least to my knowledge – this is their first album.

Most of their music seems to be notated, there are strict harmonic structures but the solos are freely improvised. The songs sway between pure John Zorn lunacy in Apocalypso in which the saxophone screams and yells wildly over bass/keyboards riffs in unison and postmodern elegance in Des Lombrics which is based on a sick electronic big band sample that could have been on the latest Portishead album. The album literally fades away with Maloyeuk, an ill-bred Prog Rock monolith full of electronic effects, which reminds me of bands like Neu! or even the Residents. Maloyeuk also includes a hidden bonus track in which the musicians are just shouting and screaming like mad animal in the zoo.

So why only three stars? Sometimes the Prog Rock elements go simply too far, the band pushes the boundaries here. Especially in Tu es ma pause dejeuner there is too much Fender Rhodes jingle, there are too many layers of quirky synthesizers and the vocals are definitely over the top. Here the bands sounds like the ugly side of Deep Purple or even like Yes. This becomes even worse in Atmosphere 4014, a mediocre futuristic pop song suffering from candied Eighties high pitched vocoder vocals.

My advice for the future: Take them under your wings, John Zorn, and sign them for Tzadik. They are talented musicians and they have some of your weird humor as well. But they need some guidance.

Believe it or not: I really thought about that :-). I also like "He has done it with your sister".

he have done it with HIS sister ! (Camille Durieux + Clothilde Durieux !)