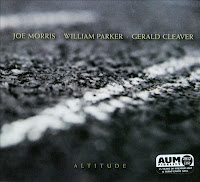 Perhaps one reason I've been enjoying Altitude so much is that I suffered through the sweltering night at The Stone when AUM Fidelity captured the event. I kind of feel like I earned (and purchased) the recording.

It was hot that night, which is corroborated by Joe Morris in his liner notes. But more so, the music was sizzling. As I listen repeatedly to the recording, I'm reminded of much I didn't realize was happening in the first place. Passages like the somewhat legato section ten minutes into 'Thermosphere' had completely slipped my jumbled memory of the event. When Morris is on electric guitar, I've come to expect hypnotically winding staccato runs, however this has wonderfully confounded my assumption. And I'm pleased to say that I'm both correct and corrected repeatedly throughout this recording.

'Troposphere', which follows a long rhythmic and textural bass solo, begins with what I can really only describe as a 'micro groove' between bassist William Parker and drummer Gerald Cleaver, with Morris adding a subdued lead. It's Parker who shines with his thumping bass line, while Cleaver fills in the shadows with cross hatching. The music builds slowly, Morris's lines growing stronger, the rhythm gaining in intensity, until hitting full stride half way into the ten minute improv.

Equally as satisfying is Parker's extended solo in 'Mesosphere'. His vocalizations along with his rhythmic bass solo is a mesmerizing combination. He exudes an earthy aura, warm, inviting and adventurous. This happened during the second set, which was just too darn hot to stick around for.

The album is an impressive document of the night, capturing surprising moments, inspired flights, and the general beauty of the improvised set.