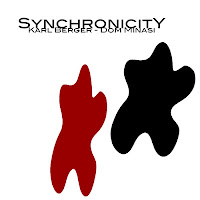 Friends Berger (vibraphone, piano) and Minasi (guitar) made a conscious decision to record a collaborative effort in November 2010 & this set of twelve improvisations is the result.  They utilize a minimalist’s approach with regard to the sounds produced, but this does not necessarily mean that there is more focus on the actual notes being played.  It’s still about the overall combination of these sounds and the impact this has on the listener.  This is a recording that demands the listener’s full concentration and, in its best moments, puts him in an almost meditative state of awareness.

Berger plucks the insides of the piano, ala Magda Mayas, (on “Bell Tower”) as well as playing the keys; and Minasi plays with a very clean tone throughout the recording.  They often utilize a technique that I’ll refer to as “winding,” a weaving that they do around each other, but while rising or falling at the same time.  It’s kind of a slow, tandem skydive that can also be done in reverse.

Berger’s vibraphone work is as interesting as his approach to the piano.  On “Chop-Chop,” he and Minasi play staccato figures that sound like a couple of starving chickens pecking at the ground.  In “Waterfall” the vibes and guitar combine to evoke sounds – appropriately enough – of water cascading downward, in a blue version of winding.

In “She,” Berger plays the piano in an almost jazz-standard-ballad style, but is still unconventional enough to still be considered “outside.”  Minasi’s contribution to this track gives the winding section a bit of an ECM feel.  It’s a gorgeous track, and one of the duo’s most successful creations.

The title track is the real standout though.  It features the winding technique carried to the extreme, compacting and refining the duo’s best musical ideas into a single 4.5 minute statement of purpose.  Then they characteristically split the unified declaration back into its individual parts on “Prophesy,” the album’s most schizophrenic improvisation, which takes sudden turns that sound majestic, ominous, joyful or full of agitation.

I spent a good portion of my Sunday afternoon listening to this album and watching yellow finches fight over the feeder perches in my backyard.  I mention this because it was the perfect visual element to accompany this music – graceful floating and fluttering, the birds winding around each other, jockeying for position on various perches, and then trying to jab a beak into each other’s eyeballs.