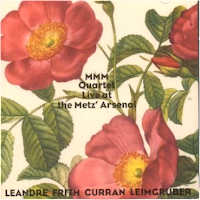 They call themselves the MMM (MillsMusicMafia) Quartet, so you know that bassist Joëlle Léandre and friends aren’t messing around on this 2009 recording at the Arsenal de Metz.  But in fact, they are having a great deal of (serious) fun in carrying out a collective improvisation that covers a broad range of emotional registers, ranging from whimsy, to delicate beauty, to in-your-face audacity.

The recording is made up of two tracks, the central one being a 45-minute tour-de-force which showcases each musician’s distinctive range of contributions.  Léandre is stunning, offering unfailingly creative sweeps of sound on her bass that range from percussive slaps, to slashing attacks, to sustained arco passages—all in service to the collective efforts of the other musicians.  Alvin Curran (electronics and piano) provides a bewildering array of sampled sounds, especially during the first segment of the improvisation, where he throws in everything from wolf howls to foghorns to assorted industrial noises, and even a bit of hip-hop.  Curran’s role varies throughout: at times his samples provide a jarring disruption of what the other players are doing, leading to a shift in direction, while at other moments he lays down a foundation that is then built upon by the rest of the group.  Toward the latter third of the track Curran largely limits himself to the piano, where his work is much more subtle and complementary, working closely with Leandre and the others in their explorations, as the track goes in a more meditative and somber direction.  Fred Frith (guitar) is just as unpredictable as Curran, sometimes using an almost organ-like sound to undergird the music, while on other occasions he provides a much more percussive voice which is out-front in guiding the music forward and providing a rhythmic pulse to support the other three musicians.  And Urs Leimgruber (soprano and tenor sax) is also consistently creative, most often with fluttering passages (especially on soprano) that alternately lead and comment on the work of the others.

It’s very hard to characterize this music in a concise way.  Each listen opens up new dimensions that were previously missed, and the quality of the recording itself is first-rate, revealing each and every nuance of the music, no matter how subtle.  There’s a lot of meat on the bones here.  And I’ll admit that I was tempted to over-analyze the recording, either by dissecting Curran’s use of samples, or tracing out the different musicians’ roles in taking the music in new directions.  (Now that I mention it, I suppose that’s exactly what I’ve been doing here!).  But this isn’t really the best way to enjoy this release.  The truth of the matter is that these are four individuals who share a common vision, and are so willing to subordinate their individual efforts to the work of the whole, that the best way to appreciate the recording is by simply letting it take shape, and enjoying the twists and turns of expert improvisers at the peak of their craft.  From moments of dynamic and aggressive cacophony, to subtler passages of careful and delicate minimalist expression, this is a recording that demands a lot of the listener, but it certainly rewards dedicated effort and repeated immersions.  A terrific release, and one I’ll be definitely be revisiting to from time to time.