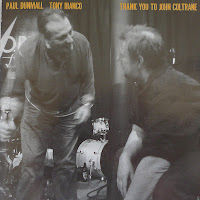 Recorded in 1967 with drummer Rashied Ali, John Coltrane's posthumously released Interstellar Space was a template for the sax and drum duo. It is a beautiful and, at times, challenging recording and has been described around the blogosphere as:

"Noisy, abrasive, violent. But it's the tight playing and the remnants of melody that give Coltrane's only duo recording its unique character." (sputnikmusic.com)

"As one of Coltrane's final recordings this duet session with Ali is one of his most essential and unique. Not only is it the grandfather of all extended saxophone/drums duets in jazz, but it also set the standard for all that came after." (All About Jazz)

And it is an obvious comparison for the long term duo of saxophonist Paul Dunmall and percussionist Tony Bianco's Thank You to John Coltrane, which is a stunningly good tribute to the saxophonist, covering a five of his compositions, with just the title song credited to Dunmall.

After repeated listens, I feel I can say that Dunmall and Bianco have created a spare, yet rousing and mesmerizing, set of takes on Coltrane tunes spanning his later career, ending with 1967's Expression, but also incorporating some re-invented themes from the 1960 masterpiece Giant Steps. And here, like the description of Interstellar Space, it's the shreds of Coltrane's melodies, and new takes on the well known themes of 'Giant Steps' and 'Naima', that make this report from the sax-drum duo format a fitting homage and a strong album in its own right.

Dunmall's playing is utterly fantastic. His precise tone is roughed up and emotive at times and clear and determined at others. His melodies and ideas are well formed and constantly in motion. Without repeating himself or playing out any one idea too long, he builds his lines with wily intensity. Bianco rounds out the sound space with vibrant fills and microscopic reactions to the saxophonist's twists, turns and torrential runs. The platform he creates for his partner's improvizations is empathetic, kinetic and driving. A great example of this is the 28 minute take on 'Expressions' that closes the album. Dunmall's playing is enthralling, Bianco's drum solo never once dips in intensity and together they capture a certain exploratory feel, untempered by reverence.

I find this to be an exciting and captivating recording. While the comparison was impossible to not make, the album is a conversation between two masterful musicians and an electricfying tribute at the same time.

Available from the label.