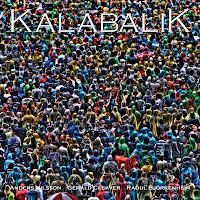 I had barely received the email announcing the release of Kalabalik and I was immediately trudging through the depths of NYC to the Downtown Music Gallery in search of it.

A man possesed, no doubt.

But not without good reason. I was at the first two shows that brought the Scandinavian guitarists together in NYC that previous winter and had fond memories of both events. Equally exploratory and hard hitting, theirs was a sound I longed to hear again.

Now, with disc in hand and sound flowing through the ears, I must say that the post production work on this is fantastic. The live sound was of course just fine as the trio of Raoul Björkenheim, Anders Nilsson and Gerald Cleaver got together as a unit for the first time; however, this release has mixed the in-store concert performance to sonic perfection.

From the initial crunch of the guitars and snap of the percussion, the listener is in for a treat. The two guitarists play solid body electrics and it's a raw unfettered sound that rings out as the two trade lead and rhythm places in their free jazz/rock exploration.

We can start anywhere really, but the interaction is not just between the two guitarists, they also mesh expertly with Cleaver's percussion. Listening to just the CD one would suspect that the songs were planned out in detail.

The first song, 'Spiraling Skies', is a piece that incorporates bits of psychedelic rock, tough rhythms and spacious textural excursions. Cleaver's drums are a constant, giving an extra pulse for the guitarists to work off, but it's a three way conversation, each one listening, reacting, provoking, agreeing and disagreeing.

Later in the program, 'Robot Tango' begins with a free exchange of processed tones and snarling snippets of melody. It rapidly coalesces into a lurching groove, hewing close to a fragmented metallic theme.

'Incarnation' finds the group starting off tentatively, the guitarists prodding the sonic-scape but soon growing ever more dense, invoking a sound not unlike the buzzing bees of Miles Davis' 'Go Ahead John'. In fact, that may be why I like this album so much, it draws from the deep well of primordial brew of inspiration that still emanates from Davis' 70's output.

'Saga Raga' is the closest they come to a contemplative space. Nilsson's slide working around Björkenheim's arpeggios. Cleaver lays low, providing a delicate underlayment, as the group slowly gels into a spacious groove. This spaciousness extends to the end if the album, the last song 'Descension' an evocative ballad, closing the set with a cathartic sigh.

The music captured here is delightful and rendered crystal clear. I come back to the recorded sound because the tonality of the instruments is so tight that from the crunch of the amps to the splash of the high hat, it all blends so well.

If you too find your way to the Downtown Music Gallery, duck as you head down the stairs.