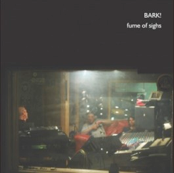 Very rarely will I stop an album before it finishes just to start it again. Two songs into the latest Bark! recording, Fume of Sighs, I realized that I was becoming very overwhelmed with what I was hearing. I removed my earbuds and took a moment to process what was happening. It was too much too fast. There we're guitar scrapes, rhythmic clatters and samples of unknown origin all convulsing my ears. I can't help myself from referring to the band's name here. It sounded like three dogs from three different breeds in the same kennel barking at each other, but in perfect syncopation.

I started the album again, knowing more of what to expect which bought me some more time for analysis and eventually words to choose when writing about what I was ingesting.

The facts of the matter are; Rex Casswell on electric guitar, Phillip Marks on drums, and Paul Obermayer triggering the samples, everything else is a big grey area. A grey area as in there are parts where all of the instruments sound as one, and times where they are so far apart you would swear they were being conducted in order to stay together. Time and  rhythm are thrown out the window as they quickly establish their own way to talk to each other. It works due to its surprise and persistence. I will coin it projectile rhythming. (Sorry spell checker.)

On songs like 'Zodiac',  the sampler takes on less of an electronic buzz and crispness and transforms into more of a percussive element which blurs the lines even more.

'Trampoline' slows things down a little and even gives room for some duo interaction as one at a time, one musician drops out allowing the other two a moment to explore. It was this track in particular that really shone a light on the sampler and just how effective it can be when coloring a track. Obermayer performs like a painter would looking for unused areas of canvas to use. It could be a sample panned hard left or hard right or directly after a downbeat or just before a guitar interjection. Just an array of sounds bouncing around in your head as you listen. Either way he consistently hits them like an archer.

'Morse Eyes', gives us a taste of that these guys can do when they play around with melody. Marks once again displaying his ability to stop playing on a dime and pick up again just as quickly.

Unfortunately there has to be a downfall and for me it is my attention span. As great and as fresh as the beginning of the album was for me, I did find myself not as engaged as the album was coming to its conclusion. Full marks however for giving me something to get excited about and forcing me to look at rhythm in a new way.

Can be ordered directly from the label.