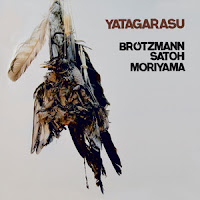 Improvised music in Europe has developed out of American free jazz, without the first musicians of that genre (and Peter Brötzmann is one of them) being simple epigones. Even his early works like his trio with Fred Van Hove (piano) and Han Bennink (drums) were bold and independent, yet unfinished sketches of a new music, a typical standing-on-the-shoulders-of-giants thing. This is why some improvisers, who claim the outstanding and ultimate originality of their music being only indebted to moment and interaction, are only partly right. Non-idiomatic improvisation is not reduced if you consider individual and genre-related history as parts of what is happening in this music. If Sigmund Freud was right and men do everything deliberately, then a reflection with consciously or unconsciously and inevitably used knowledge of musical history helps to create and understand this great, dazzling and wonderful network of contemporary free jazz.

Peter Brötzmann has always known that. In “Soldier of the Road”, a documentary about him, he says that he considers himself a “middle European guy” with all the history (and the clichés – even the negative ones) it brings with it. He knows that he is influenced by Sidney Bechet and Albert Ayler and Ornette Coleman (in other words: the blues), but also by German brass bands and political folk songs (as you can see in his version of “Einheitsfrontlied” with Van Howe and Bennink).

In all the reviews of this week you can see that there is a certain linearity and consistency in Brötzmann’s approach. On “Yatagarasu” he teams up with Masahiko Satoh (piano) and Takeo Moriyama (drums) which refers to his trio with Van Howe and Bennink (see above) and their seminal albums “Balls” (1970) and “Tschüss” (1975). Although Brötzmann  has also released similar trios with Misha Mengelberg and Han Bennink (“3 Points and a Mountain”), Alex von Schlippenbach and Sven-Ake Johannson (“Up and Down the Lion”) and Marilyn Crispell and Hamid Drake (“Hyperion”) over the years, this line-up is relatively rare in his work.

“Yatagarasu” is an almost classical album, an iconoclastic outbreak,  just because Satoh’s and Moriyama’s ways of playing differ completely from those of the musicians mentioned above although both of them are Japanese free jazz veterans of Brötzmann’s generation as well. Especially Satoh draws on the unlimited resources of jazz history in a way – let’s say – Matthew Shipp does it as well. While Fred Van Howe is mainly a sound pioneer exploring the limits of the piano and Marilyn Crispell has a rather romantic approach somehow, Satoh’s playing is based on his education as a classical composer and on swing and modern jazz. Moriyama, in contrast, is a very skilled listener, trying to provide maximum back up for his comrades. His style differs from Bennink, who has always tried to include humorous and clownesque aspects, and Drake, who is deeply rooted in African-American jazz, in a way that he is reserved but absolutely determined and focused. In the end the trio somehow reminds me of Cecil Taylor’s band on his early release “Nefertiti, the Beautiful One has come”.

The album consists of two larger pieces (“Yatagarasu” – a three-legged crow representing the sun in Asian mythology – and “Icy Spears”) and two shorter pieces (“Autumn Drizzle” and “Frozen Whistle”), which are the actual highlights of the CD, especially “Frozen Whistle”, which is just a sketch, is of the utmost beauty. “YAT” is superb, conservative (in a positive way) free jazz.

You can watch a short but significant clip from last year’s Wels festival here: