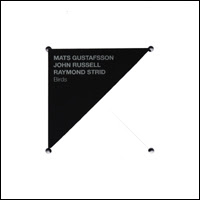 My girlfriend lives in a tiny but really nice apartment in Munich offering a great view on a small beautiful park inhabited by lots of wildlife like squirrels, hedgehogs, mice and dozens of birds like ravens, woodpeckers, blackbirds, sparrows, tomtits and many more. Especially in summer there are real concerts in the mornings, and when you are up early you can watch this world come to life from the balcony. It is a wonderful, albeit chaotic life, full of beauty and (dis)harmony, both peaceful and martial (for example when a raven chases a squirrel), joyous, abundant, high-spirited.

I have always had the notion of free jazz as the perfect imitation of nature, and especially albums like “Birds” by Mats Gustafsson (soprano and baritone sax), John Russell (guitar) and Raymond Strid (drums) prove my assumption. Recorded live at the 2011 Hagen Festen in Sweden and consisting of the 44-minute central track “The Earth As The Sun And The Ravens Are Watching” and the encore “The Birds. They Fly As They Want, Don’t They?”, the album is a thematic approach to birds’ life in general.  It seems that you are listening to the flapping of wings, the chirping of songbirds, or the cawing of ravens – it is a true onomatopoetic approach of instruments trying to sound like nature.

You would have expected a record like this from many improv players but not necessarily from Mats Gustafsson, who is usually famous for his powerplay groups The Thing, Fire! or Tarfala Trio. Here we find him almost only on soprano, being much more the microtonal improviser than the full throttle player we've gotten to know (and love). He sounds much more like Evan Parker than Peter Brötzmann. But showing this different side you can see what a versatile, prolific and virtuoso player he can be. John Russell brings in his typical microtones as well, creating rainstorms of flageolets that add another natural aspect to Gustafsson’s twittering. Raymond Strid uses a very small drum kit only, he is not interested in rhythmic patterns, but more in the sounds a kit and other percussive instruments can produce (this is why he uses clappers and iron bars rather than usual sticks). So while Tarfala Trio (which is Gustafsson and Strid but with Barry Guy on bass instead of Russell) represents much more classical free jazz, this group is rather about minimalist sound exploration.

What is so fascinating about this album is the masterful interplay, its density and the close listening – like a flock of birds flying in perfect formation. A truly natural piece of improvised art.