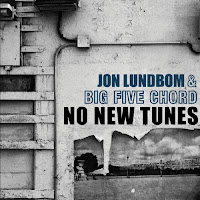 It begins with indistinct chatter morphing into a piercing sine wave, then shifting into a high energy solo percussion and finally into an avant-garde yet modern-jazz inflected horn driven melody, all within mere moments. 'The Bad! Thing' is an intense introduction to guitarist Jon Lundbom & Big Five Chord's fifth album, No New Tunes.

Like a lot of modern and avant garde jazz coming out as of late, there is a good deal of rock mixed in within the compositions. It seems like the magic combination, enough structure for the listener to grasp onto, enough free playing to let the music breath and a nice dose of adrenaline when the distortion kicks in. The song 'The Other Third One' is a perfect example of this blend. As the music amps up in intensity, a snarling guitar is deployed over the deep and tricky bass groove, playing out an eviscerating melody until only a few power chords are left.

Lundbom's melodic ideas are jagged and rhythmic. He doesn't play ones that are easy to digest, and his bandmates deliver aptly angular lines that push the boundaries of their instruments and musical notation. The feeling of being just on the edge of control gives tunes like the aformentioned 'The Bad! Thing' a palpable excitement. The song 'Taken for Surrender' exudes a more controlled atmosphere, featuring a guitar bass and drum passage that mixes up the melodic and textural exquisitely. The horn lines that weave in and out of the solo passages can be quite 'cool', but can also deliver winding and punchy solos like the one opening up 'Follow the Swallow.''

But, then again, what would you expect from a group that features such a stellar cast of NYC based musicians including Jon Irabagon on alto and soprano saxophones, Bryan Murray on tenor and balto saxophones, Moppa Elliott on bass and Dan Monaghan, drums?

All in all, an excellent recording, bringing new ideas to what jazz guitar can be but not abandoning the rich legacy of jazz guitar.