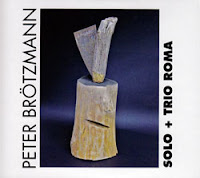 In 2011 the Festival International de Musique Actuelle de Victoriaville celebrated Peter Brötzmann's 70th anniversary with two concerts – the first one a solo performance and the second one a trio with Massimo Pupillo (electric bass) and Paal Nilssen-Love (drums).

Brötzmann has had a long tradition of solo albums (from his first one “Solo” – also known as “Wolke in Hosen” -  in 1976 over seminal ones like “No Nothing” or “Right as Rain” to “Lost and Found” in 2006) and he is one of the few who is able to maintain the tension over a full record (like Steve Lacy and Evan Parker). What is relatively new here is the fact that he plays two pieces he has recorded before: “Never too late but always too early”, a track from the 2003 trio album with Hamid Drake and William Parker and Ornette Coleman’s classic “Lonely Woman”, which he has recorded in 1984 on “14 Love Poems”, another splendid solo album. While the first ones have almost nothing in common except the title, the Coleman cover here is clearly faster and shorter and therefore closer to the original than the 1984 version, which is more tender and fragile, even sort of shy, but with a harsh outbreak in the middle of the track. The highlight of the solo performance on this CD is “Shunkeln* to Dark Blues”, which features Brötzmann on b-flat clarinet playing a really dark, sad blues, a side of Brötzmann you hardly get the chance to listen to in such a consequence.

Trio Roma shows Brötzmann’s other side, the wild and brutal one. The CD consists of a 70-minute-whirlwind called “Music Marries Room to Room” and a short encore (“The Turning Glory”). The band is Hairy Bones minus Toshinori Kondo and I could just repeat what I wrote above. Again we have the trio acting in full speed and we have trios and solos but this here is even more a group improvisation and there is a greater focus on Massimo Pupillo. He is the real sensation of this recording, he does not play his bass in a conventional way, he rather strums chords in boisterous attacks, in fact it seems as if Motörhead’s Lemmy has joined a free jazz group. Thus, his bass guitar sounds like a lawnmower, an airplane turbine, a buzz saw, a shredder, like bombs detonating - you can literally feel the bass tones in your stomach.

The rhythm section is thunderous in general with Nilssen-Love providing polyrhythmic barrage fire to Brötzmann’s assaults. It is a vortex of sounds – some shrieking, others almost torn, spat, even puked – owing credits both to hardcore and to Dadaistic sound poems, sharing their free rhythms, their devoted declamation and their rejection of conventional form and content. Trio Roma is a supremely passionate and committed group.

*  ”s(c)hunkeln” is something especially Germans like to do sitting on plank benches in beer
tents, they link arms with each other and then swing to the sound of brass bands. It does not
work when a band plays a blues.