Stian Westerhus - The Matriarch And The Wrong Kind Of Flowers(RuneGrammofon, 2012) [part 1 of 3] 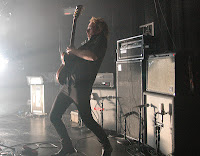 A note from the author: I consider Stian Westerhus - together with a fistful of other very young musicians (some of them are portrayed here on both side of the page) - as one of the most promising names in the greater free jazz community. That’s why the following review is going to take into account and give a brief overview both his feverish live activity and his short but already dense recorded output, up to his just released solo album...

I've been to a Stian Westerhus live set three times during the past three years.

The first one was in Oslo during the 2009 edition of the All Ears Festival for improvised music. In the picture at the end of the article (Pt 3) you may have the opportunity to spot among the listeners my astonished face, but in no way am I going to unveil my secret identity, because I’m actually running an undercover operation for the blog, and Boss Stef is my only safe contact. By the way, at the time Westerhus was rumored as a new emerging name worthy of attention on the Norwegian scene. A few minutes before the concert a gentle - and now I know caring (for my hearing) - Norwegian man suggested I take advantage of the earplugs available for free at the concert hall main entrance. At first, I was a bit skeptical and cheeky (as a free jazz spy has to be), but noticing that everyone around was doing the same, I followed the suggestion. And it was a wise move. In not more than half an hour I 'auditorily' (if one can say that), experienced almost all the conceivable sounds that can be made by torturing the strings of a guitar, delving into the wood below them, caressing and hitting them non-stop, or with unbearable (and how emotional!) slowness, pinching them with tiny and trembling metal grips, scraping the frets and the body of the instruments as only an “advanced guitar anatomist” could do. It was evident to everyone that he was perfectly aware of what the instrument would give him. And to crown it all, Westerhus was controlling a plethora of effects pedals and stompboxes that were difficult to identify, considering the pretty unorthodox use he was making of them. Flabbergasted, I left my heart there, but luckily not my ears.

The second time was again in Oslo, the following year. The venue this time was a nice little church in the city. Maybe only a small audience but we enjoyed a long and intimate excursion of many guitar styles and sound possibilities with long passages yet no electric amplification! No amps .. however it was an electric guitar, capitalizing on the natural echo provided by the empty vaults and every cavernous indentation in the ceiling of the church. By now he had incorporated the use of a cello (?) bow to create wider musical landscapes. I was about to see the light and convert myself to Christianity, but then I remembered I’m a practicing free-jazzer…

The third gig I attended took place in the lovely little town of Foligno, central Italy, during one of the several days of the 2011 Dancity Festival. Again in a church, though deconsecrated and totally empty this time. Westerhus, his two loyal amplifiers and an expanded range of pedals and stompboxes were on a low wooden platform where once had certainly been the altar. Storm and dead calm, classical arpeggios and heavy metal riffs, the bow and the ongoing “preparation” of the instrument through the insertion of objects between and under the strings. Moreover the definitive symbiosis with the electronic devices he adds to his sound. Stian Westerhus can accurately control his pedals effects - apparently some of them are personally “modified and bent” by the artist himself in order to improve or alter the factory settings and features - with his feet. Stian Westerhus, for what I know, wears just heavy leather cowboy boots. Could you believe it? I’m not saying he presses the pedals as everyone does. He rotates knobs and moves tiny switches into the desired position just using the tip or the heel of his boots. Hey, I mean, he’s not wearing comfortable running shoes! Shall we consider this as a biological Darwinian improvement of the guitar player species? Will all the future guitarists wear leather boots and use their hidden toes to maneuver electronic devices? Again, don’t try this at home. Or at least, start exercising with naked toes. In any case, the ever-changing suite he performs in his live solo gigs lasted maybe an hour and maybe few seconds. Breathless.

I unfortunately missed Westerhus recent concert in Rome, where I live when I need some rest from my assignment as a mole in the filthy free jazz underworld. I will never forgive myself for this loss.

Beyond the peculiar coincidence that two of the three concerts I've seen took place in a church, and this last album has been recorded in a mausoleum, it’s tempting to fantasize on the role of religion and spirituality in his music. Why am I describing all of this (I mean the concerts, not my spy life)? Some considerations are really evident to me.

Notwithstanding a mainly unchanged approach - one long suite that grows, alternating between crescendo and diminuendo - all three performance were different indeed. The constant development and research of sounds and techniques seem to be at the core of the artist's musical vision. Stian Westerhus is unceasingly evolving in an unpredictable way. He doesn’t just make the guitar sound as he wants, he makes the guitar sound in ways that the instrument itself didn’t know it was capable of. And the more his sound becomes recognizable and personal, the more he’s going to take it a step further and change it again.

His recordings trace out really well this turbulent inclination.

Take a look and listen here below to get a hint of a live set:

But Hey! Right! The review of his just released album... I honestly don’t know. I still have not listened to it …

… to be continued tomorrow on this blog ...