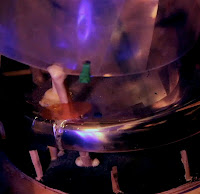 Katherine Young, by name and by nature, plays bassoon. The bassoon, or fagot, is scarcely known beyond the boundaries of classical music and orchestral repertoire. Many people, if asked, would probably not even distinguish its shape and know it has such a significant sound and it has had a weighty role for example in many Mozart’s compositions. You can say as well it is infrequently used as a jazz instrument (admitting - not me - that instruments have a preferential application to a music genre). What about the contrabassoon then? That’s the real blast!

In any case this artist may already boast about a substantial discography, important collaborations (Peter Evans, Fred Lonberg-Holm) and a broad live activity as solo performer and as a member of the various large ensembles under the tutelage of Anthony Braxton, extensively touring all over the world. She has been already reviewed on this blog, both as regards her solo work and in relation to the interesting duo “Architeuthis Walks On Land”.

The three-part present work started as a composition for a fixed percussion trio enhanced by an improvising and unorthodox ensemble - mainly brass, the bassoonist included - and it’s strictly connected to the video projections that visual artist Michael Kenney specifically developed for it. This results in a short (just 21 minutes) but highly pleasurable listen.

According to the liner notes from the label, the second episode “Capacity” is the only unaltered document of the premiere performance. In it, especially in the central part, the insisting wooden objects “carpet” perfectly melt with gongs, sticks, drums and for some passages (if I am correct) with a musical saw, building a coherent imaginary landscape made of tone-colors and almost tribal atmospheres.

Katherine Young has instead reassembled the opening and closing acts, respectively “Binding-Releasing” I and II, to encapsulate the main and dominant composition.  The first one moves among whispers, whistles, clacks and ventriloquisms provided by the many brass, softened by emerging gentle piano chords. There’s obviously a constant use of extended techniques by all the musicians. The second and final one starts and grows instead from a deep timbre surrounded by buzzes, obscure synth chords and breaths.

I’m sure that the live execution accompanied by the simultaneous video installment is the best embodiment to take advantage of such a composition.

The release is available for preview or as a digital download from the label and here you have the first part of the related video.