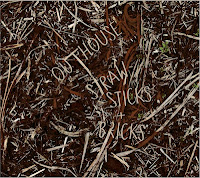 If you've never come across the British band 'Outhouse' before, now is the time to get acquainted. This is Outhouse's third record, the first two Outhouse (2008) and Outhouse : Ruhabi (2010) were both classic albums in my humble opinion. I love the mixture of free moments and dark driving grooves that Outhouse seems to specialize in. The band has changed a little over the years with tenor saxophonist Mark Hanslip leaving the band to be replaced by Tom Challenger, however the basic formula both musically and instrumentally has stayed much the same. The group are Robin Fincker/Tom Challenger - Tenor saxes/Clarinets,  Johnny Brierley – bass and Dave Smith – drums. On this latest album they've invited Hilmar Jensson (guitar) to add to their sonic landscape and which to my mind really fits very naturally into the group's sound.


The groups formula for compositions tends to work well again. Although more or less the same as the previous two albums it has developed and become more refined. The group has a style of 'stop:start' type of melodies. These tend to state a theme which then throw a soloist into a very open space to develop some ideas. Gradually the group moves into an exciting rhythm with the melody lines becoming bass lines, or vice versa. It might look at first view that it's just a formula, but with Outhouse they've developed this into a style that works well. It lets the group move freely between recognizable melodies and very interesting modern improvisations. The group although not 'free' in pure terms is (if you heard them) not unlike 'Human Feel' who also managed to finely manoeuvre between several styles to create a very individual, and eventually, influential sound.

It would be difficult to pick out any particular track as all the tunes, nine in all, have great moments in them.  Luckily - see below - you can listen to the album via the Loop Collectives website. The structure of the compositions is always looking for ways to fuse the various possibilities of freedom and melody. An example such as Fool (tk3) launches out with a improvised entry from sax and drums. The guitar and the 2nd sax comes in with a sort of rubato melody which little by little dominates the piece. This leads the group into open water, but look out, the music then bursts open with a wonderful rocking (unison) melody before leading towards more angular solos. The piece re-descends into light and gentle improvised sound. Golfo (tk5) uses some of the same ideas but gives a wonderful looping melody that's very cleverly arranged to give a soloist maximum possible inspiration, a little like jumping off the top board at the swimming pool! Many of the pieces use this idea in one way or another and all the themes have great twists and turns both melodically and rhythmically. Kitchen in the Middle (tk1) plays an insistent plodding theme before letting the soloists out like dogs let off their leads.

And of course there's Hilmar Jensson who's guitar adds a new dimension to the music, really giving some serious 'umpf' to the themes when playing in unison. At other times he uses the space created by the group to add floating sounds a small solo ideas, not unlike a 21st century Bill Frisell. A good example of this can be found on Luna Verde (tk4).

All in all this is an excellent record, highly recommended to anyone who's interested to hear how the younger generation in the UK have fused jazz and rock, but also the influences of the UK improv' scene. I can also highly recommend the bands first two albums for further listening.

Listen to the album, and band here via the Loop Collectives site.

I should mention this album is from April 2011. I'm not sure how it got into our review pile so late, if you've seen this one around you'll now know it's sort of a deja vu moment.