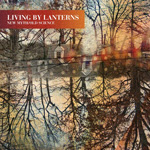 
Here's a record to add to Paul Aquaro's recent post concerning Sonic Liberation Front's record tribute to Sun Ra. Here is Living by Lanterns a group co-led by Mike Reed and Jason Adesiewicz - see below for line-up. Apparently these pieces, and of course this CD, were commissioned by the Experimental Sound Studio (ESS), based on tapes from a kind of free form session of Sun Ra's back in 1961, and catalogued as "NY 1961." There are no real compositions on that tape just improvised ideas. These ideas were used to inspire the music written and played on this album. it seems, from what Cuneiform say on their site that this IS NOT a tribute. However, from the amount of ideas developed from the 'root' material it seems strange to say the contrary, but who cares anyhow, it's the music that counts.

In terms of music one could probably put this into the same bag as the Exploding Star Orchestra. It's vibrant music that swings away happily with some great themes popping up all throughout the record. The 7 themes are all fairly straight ahead affairs except for track 1 and track 6. The first track is a montage of some Sun Ra 'dialogue' doing one of his rants about, love, outer space, who we are, reality, myth and where we come from. If you've seen the various documentaries on Sun Ra and easily found on YouTube (hint!), then you'll know what I'm talking about. The sixth track 'Glow Lights' is the only 'free-form' piece on the record, surprising really considering the pedigree of this group.

The other five tracks all have some nice moments and solid solos from the stellar line up (see below). As already mentioned this is essentially a swinging record, even if some of the themes are dark in nature. I particularly liked the second track 'Think Tank' with it's glistening vibes. The track quickly falls into an ostinato line with one of Mary Halvorson's wammy-bar distorted guitar solos flowing over it. Jason Adasiewicz comes along to add some spacey vibes as the tune develops before Taylor Ho Bynum jumps in to give the group a sort of free form Wynton Marsalis bluesy slurs to work with before the group heads back into the melody. Much of the front line melodies are carried by Greg Ward who really stands out on all the tracks, either through his solo lines or his lead playing. 'Shadow Boxer's Delight' (tk4) seems to be a feature for Tomeka Reid on cello. The tune has a lovely melody which although played at the beginning really comes into it's own at the end when the rhythm section drops out.

The other tracks such as 'Forget B' or 'Old Science' are well written pieces with attractive melodies and good solos, but for my money it's a little bit lacking in excitement, or maybe that's just what I heard from my armchair. I found the record a really good listen but when looking at the line up I couldn't help wondering if a few more chances could have been taken. It's almost as if every soloist has his/her own feature, but isn't necessarily suited to 'that' job, or maybe I could say 'in that context'.

A nice record which could be worth while tracking down if you enjoy fairly straight ahead music from the young Chicago/New York scene. Although if you're looking for intense sounds that might be normally associated with some members of the group you're probably better off looking in other directions.

It is a little more straight-ahead than some of the individual participants' usual output, but I don't think only 3 stars is fair in the context of ratings given by this site. Definitely needs an additional star.