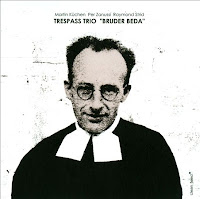 In 2009, Trespass Trio released its debut album " ... Was There To Illuminate The Night Sky ...", and it was an immediate hit, at least in my end-of-year lists. The Swedish band, consisting of Martin Küchen on alto and baritone, Per Zanussi on bass and Raymond Strid on drums, is indeed exceptional.

In contrast to Martin Küchen's other band, Angles, the trio's approach is more minimal, more intimate, full of suppressed menace and calm development, yet also rawer and fierce, despite the similarity in themes. Compositions like "Don't Ruin Me" and "Today Is Better Than Tomorrow" will be recognised by Angles fans.

The art work and the title of the album are highly unusual. Bruder Beda refers to a relative of Küchen "Ernst Gerson, a Jewish German veteran of the World War I who became a Catholic monk, adopting the name Bruder Beda. When he decided to return to the secular world, when both the Nazis and the Zionist movement were growing, big troubles waited for him". Despite his efforts to claim he was Arian, he was eventually deported and killed in Auschwitz. If you read German, his story is related in this book. The whole complexity of the individual struggling with identity and trying to make his own life, his own truth, against forces trying to put him into a category of religion or ethnicity, both claimed and rejected, is well reflected in the music.

The entire mix of distress, sadness, rage and compassion can literally be felt when listening to Trespass Trio. It is moving and shocking. Hard and touching and deep.


You can buy the album from instantjazz.com.
Stef on Wednesday, November 28, 2012
Share