Picking up from where we left off yesterday ... 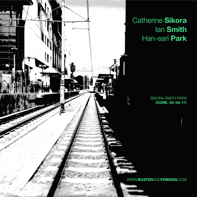 Bill Dixon used to say (more or less) “there's always a leader in the band, even if it isn't the leader.” What he meant by that was there was always someone who is the “best” in the band (cf Brian Blades with Joshua Redman.)

On "Cork 04-04-11" there is no doubt that Sikora is the most luminous of the three, so much so that this recording is, now and forever “one of Catherine Sikora's early recordings.” This is less the recording's fault and more the fault of Ms. Sikora's continued emergence as a leading, steering voice on the tenor saxophone. I say “continued” as Han-earl Park, despite being “first”, found me long after this more recent solo performance by Ms. Sikora, found again on the Kreilley video channel.
http://www.youtube.com/watch?v=oF4tD-FSkQs 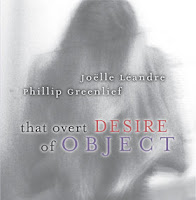 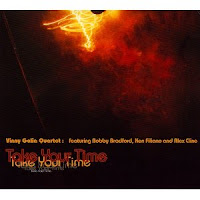 And just who is this Kevin Reilly and why does he have such a great YouTube page? Mr Reilly is the proprietor of the delightful Relative Pitch label, responsible for two equally compelling through very different releases showcasing two distinct approaches to the single reed. Yes, more than just the single reed is showcased—certainly readers of freejazz-stef have at some point solemnly nodded along as they read one glowing review after another about the undeniably glowing Joelle Leandre. In a perfect world, an equal amount of solumn nods have already affirmed the undeniably excellent Bobby Bradford's cornet playing. Yet, when That Overt Desire of Object and Take Your Time, are listened to one after the other, you hear two different yet equally remarkable realizations of the saxophone's place in improvised music. The Yin and Yang if you will.

In the Yin corner we have Phillip Greenlief in duo with Leandre on That Overt Desire of Object. The cover of the recording is a blurry photo, in the liner notes is written:

Joelle and I have talked a lot about the state of the world throughout our friendship
a common underlying theme was greed, and all the malaise it causes.

Key words = asymmetry, “other sounds”, “lowercase” music writ large, cursive handwriting; all the things mechanization and increased production necessarily crush. Does That Overt Desire of Object remind anyone else of that Belgian crime fighting sensation Hercule Poirot? Perhaps it is the portrayal of that time between the “great wars”: the last days of a certain kind of civility and attitude towards art, those twilight hours before the Holocaust and The Bomb, before plywood and plastic above ground pools, that fabled time when everything was made by hand and made beautifully. Isn't it funny how non narrative improvised music made by two people can evoke the gestalt of an era?

So when is Golia going to get his MacArthur? 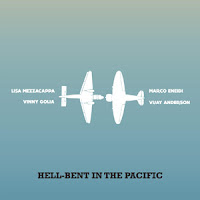 ...Hopefully right around the time Eneidi get's his MacArthur.

Once again, a meeting of two absolute masters of the single reed, and Marco is one of them. The combination of Golia and Eneidi, like the combination of Eneidi and Spearman (The Marco Eneidi Coalition), and Eneidi and Brotzman (B.E.E.K. Live at Spruce Street Forum) before, promised joys untold. I was not disappointed.

Nor was I disappointed by Vijay Anderson, who I've heard perform with Eneidi. (It was epic.) Anderson's playing brings to mind that of long time Eneidi colleague, the undeniable, under appreciated genius of percussion, Jackson Krall. Both have an active sound that is well peppered and punctuated. Anderson knows what makes percussion exciting to listen to and he lithely delivers. Of course he does fabulously with the down tempo, but I'm more of a car chase guy.

Mezzacappa is a wonderfully lyrical bassist whose lines in the ensemble could just as easily stand as solos...indeed throughout the recordings there were times when I wish the recording came with alternate “dub” takes.

This is an absolutely fantastic recording. Just get it already, will you? 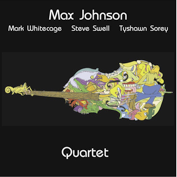 The Max Johnson Quartet also celebrates the composed among the improvised. Mark Whitecage, an under appreciated long time stalwart of our beloved improvised music, gives us another reading of the alto's place in our beloved music. One of the benefits of FreeJazz-Stef is the ability to listen to a number of different contemporary alto players, and in so doing really have had more than one “beyond good and evil” moment wherein all the musicians really are sitting at a round table, are all manifestations of Sarswati, and as such, are all equal.

And so it is neither condemnation nor praise, but merely synesthesia when I say Whitecage is a little more oaky than Lehman—less of a patio sipper, less “bright” less “fun.” Combined with Max Johnson's rough and ready, present and accounted for bass with Tyshawn Sorey's understandably celebrated drumming, and the fantastic Steve Swell's trombone (here really isn't much a trombone can't make better) the pairing is well rounded, full bodied and complete.

Mr. Coombs' 5 star assessment strikes me as a bit of a stretch, though by no means a future impossibility. It's times like these one wishes the US didn't have that addiction to expensive wars, and was a little more loose with the grant money. There is so much to like about each individual musician, mostly because their musical personalities are so well developed, which in this case may be a liability. The voices need more time to meld, to become even greater than the sum of the parts. Were this group to have the luxury of extended stretches of rehearsal and work as a group (like, months in a castle somewhere, or a state sponsored tour of the United States) I'd wager a lasting work would emerge. 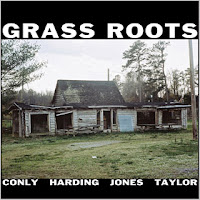 Jones digs deeper on this one. He sounds like he's trying harder. The compositions are less contrived than on Big Gurl. The grace and support of Sean Conly on bass and Chad Taylor on drums also makes this one worth hearing. Now I can't wait to hear Man'ish Boy (A Raw & Beautiful Thing) with the ultra-mega excellent Cooper-Moore and the equally fantastic Rakalam Bob Moses. 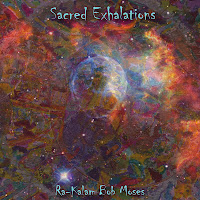 Though clearly most would disagree, certainly someone hears me when I say if Pat Metheney only put out one recording, and that recording was Bright Size Life, his esteemed place in music would be just as secure as it is now, all those recordings and awards later.

There is a perfection to Bright Size Life, much like there is a perfection to... The Lowell Davidson Trio. HA! Bet you never saw that one coming! But really, Rakalam Bob Moses trajectory has, with Sacred Exhalations, taken him from the birth of our Metheny consciousness all those years ago, put him right next to Milford Graves at the drummer's round table. What's more, the 3 horn/1 drum instrumentation harkens this listener back to Graves' Babi Music.

As with Babi Music, what I love about Sacred Exhalations (and Hell Bent in the Pacific, Lost in June, and so many other records within our beloved area of music) is the sound of non quantized, pan-tonal, pan-rhythmic spray of prana. Either you like that kind of thing, or you don't.

Either way, it's a way of being in music that “before” was not, then, one day was. Still today, despite the smothering in life brutal tapestry, “This music” this way of making music exists, attracting musicians of all ages and all backgrounds. 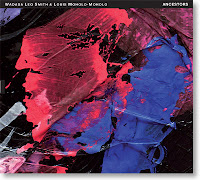 And so we end our meditation on 2012 with Wadada Leo Smith and Louis Moholo-Moholo's release Ancestors. A fitting concluding rite.

A lot of music, improvised music included, has something to prove or something to say. Ancestors has something to share. No need to prove anything. If you don't get it, it's not for you. Though the chances of any listener “not getting” Ancestors is pretty low. It is a music for everyone—much in the same way clean drinking water, appropriate housing, medical care and equal treatment under the law is for everyone.

The beauty of Smith's sound (both sonority and attack) eclipses all concerns about “right notes” in all but the most pathologically neurotic. His sound is the careful distillate of the entire history of the trumpet? Is that fair to say? There certainly is a majesty and complexity that doesn't emerge overnight.
That's for certain.

For large stretches, Moholo-Moholo plays unadorned patterns, but plays them magically. Here's a
confession: sometimes when I'm listening to music, I'm also washing the dishes. There is an arresting authenticity to Moholo-Moholo's drumming, even at its most plain that made me take off the yellow rubber gloves, put down the dishes and listened with my full, undivided attention.

Ancestors, like Look Up, includes vocals. In this instance it is less an admonition for our arrogance (appropriate though that is) and more a declaration of love for colleagues and antecedents. Something we should all do more often.