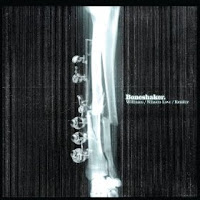 I don’t like Decembers. The days are getting shorter and shorter, it is cold and muddy outside, the cities are crowded with aggressive people shopping for Christmas. Christmas actually: What has it become? It starts in early November with the first decorations and ends on Boxing Day when families have almost killed themselves fighting over their Christmas dinners. It’s hell! My personal strategy to overcome December is a self-made musical advent calendar. One track each day keeps madness away. Today, on 26th of December, it is 'Hostilities of Progress' by Boneshaker, a hardcore trio consisting of Mars Williams (reeds, toy instruments), Kent Kessler (bass), and Paal Nilssen-Love (drums and percussion).

To be honest, I chose 'Hostilities of Progress' at random, I only wanted Boneshaker to be part of my calendar today. I could have chosen What does not kill you (another programmatic title) or 'Sticky Wicket' as well, these pieces would have had a similar effect. But 'Hostilities in Progress' is perfect because this piece starts with a typical Brötzmann howl (I actually checked the notes on the LP if he was guest-starring) and does not release you for the next 15 minutes. I am gonna play it over and over again. It is full throttle free jazz, you feel your fists clench and your face contort while listening to it. After you survived it there is nothing left in you (and maybe in the players neither) because you (and they) did the best to handle the insanity around us.

But there is hope on the album as well: 'Beauty of Sadness', the second track on the album, is unlike the other pieces. It is indeed a beautiful and melancholic - but also a grim - composition starting with a solo improvisation by Kessler which sounds like a double bass in a philharmonic orchestra gone astray, before Williams joins in with a heartbreaking theme that reminds one of Ry Cooder’s “Paris, Texas” theme, only that it is played by a saxophone in a zombie ghost town. The track is full of scattered drum parts, toy instruments, creepy voices, absolute silence, bowed bass lines, and an incredibly elegant saxophone at the end.  When you listen to it in the dark, it is really scary. On the other hand the beautiful elements the track includes make me look forward to another new year, even knowing that there will be another December at the end – but also another advent calendar.

Boneshaker is not newfound territory but it is music which is emotionally exposed and raw. Exactly what I need to cure my Christmas blues.

You can listen to the first track here:

Boneshaker is released on vinyl only.

You can buy it from instantjazz.com