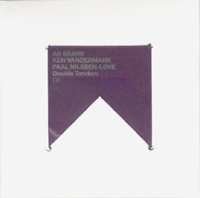 Writing about music can be puzzling.

Was there anything wrong with the album? Maybe they could not get the live magic on CD, although we are talking about first class musicians here. Double Tandem is a combination of Ken Vandermark’s duos with Norwegian drummer/percussionist Paal Nilssen-Love on the one hand and his duo with Dutch multi-reedist Ab Baars on the other.

Even for free jazz standards this music is totally unpredictable which is mostly Ab Baars’ merit. Especially when he plays the clarinet he dances elegantly around Vandermark’s baritone riffs, using klezmer melancholia or even swing elements, it is this typical clownesque and humorist Dutch approach to free jazz. Although if there are typical free jazz break outs, it is Baars again being the more prominent one while Vandermark only adds spicks and specks for their barrage fire. And just when you think you know what is going on here, the music rocks to and fro from loose cut- off hectic solos sliding into a James-Bond-theme and an alternative rock riff (does anyone remember The Psychedelic Furs?) to really laid back, almost touching, laconic observations.

So what’s wrong with the album? Nothing, of course. I was wrong. There is music which is hard to describe. Double Tandem has build up music whose real expression lies below the surface. It injects an unsettling sleaziness into a funny, occasionally wild and boastful collection of tracks that walk the line between postmodernism and sincerity. The tracks are all living, breathing entities, not blank slates to project my plain ideas and desires of how to review music on. This is music about honesty and truthfulness. Maybe I should have kept my mouth shut. 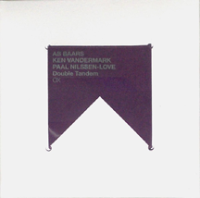 When I was asked by Martin to join our reflections on Double Tandem’s Ox in a double review (what else could you possibly do with such a name? - I mean the group not Martin), an album for which I had enlisted first (let’s not forget it!), I thought: “the Kartoffel is definitely challenging me!” Then he told me, sibyllic as he may be, that he was soon going to attend one of their concerts. And I subsequently said to myself: “Hell! He’s going to have a lot more to say!”

That’s why I felt relieved when I noticed that he was shilly-shallying the actual writing of the review. I had to do something in the meantime to fill the gap.

Having not succeeded in organizing an off-the-cut gig of Double Tandem at my place, I had focus instead on deep and careful listening of the release. But this did not help. The album was good, maybe really good and compelling, and in some way different from other productions by the featured musicians . But still I had not enough stuff to give a well-advised critical judgement. What was the untrustworthy German preparing? Did he maybe know in advance about the unwritability of this review? Was it just a trap? Were other members of the editorial staff involved? I had to be cautious and ready to fight.

Then suddenly he sent me the draft of what you can read here above. And obviously I felt as the dumb conspiracy lover I often tend to be. Or maybe not, because in some way I was truly right. Martin had written a supreme review about the album.

Sure, I could say something about the always-astonishing pliability of Paal Nilssen-Love on drums, for example in the way he soberly enters during the second track as a high tide of muted dings after almost five minutes of exquisite, romantic saxes duetting. Or I could even try to explain why I like the way he uses the kick drum, or again tell about how he’s able to create real chords from drumming around minute thirteen on the same track. Or something more about the perfect match reached by Ab Baars and Ken Vandermark in their interplay. About how, soloing in synchronicity or in juxtaposition, following harmolodic principles or very romantic paths, they constantly achieve an enchanting result.

But basically what I really would like to say, it’s just what Martin has written before me. And that’s why I certainly recommend the album, but I recommend moreover Martin’s review.