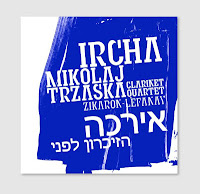 The music though, is completely different than on the previous albums. These offered pretty abstract improvisations, and "Watching Edvard" offered  a series of quite distinct, almost situational theatrical conversations between the four instruments. On Zikaron Lefanaj (Hebrew for "Memory Before Me", if I can trust what I find on internet), the mission is grander and spiritual, much in the same vein as Waclaw Zimpel's music with Hera, offering long pieces with clear melodies and themes, full of subdued passion and reverence, spiritual longing and the kind of sadness that is inherent in klezmer music.

Strangely enough, the music also reminds me of the famous Flemish polyphony of the 15th Century, in which male voices sing different melodies yet in harmony, at that time a musical innovation. You can find an example in this Youtube video, the music of my catholic Flemish ancestors (not that I care very much), but it shows the deep spiritual universality that can come with music.

Back to Ircha, the music is just baffling, stunning ... by the beauty of the compositions, the way they are played, the coherence of the interplay, as in the combination of subdued control and raw expressivity. It is jazz after all, and possibly even too avant-garde for real jazz fans at that. It can be moving and tearing you apart at the same time. Calming and distressing. Comforting and challenging.

But it all comes from a deep well : traditional gypsy music (as in "Red Shoes"), jewish music ( as in "Nigun Number 115") and Armenian traditionals (as in "Akhtamar" - if interested you can read Akhtamar's original story here), but the traditionals add to the flavor, and the band's compositions can easily stand the comparison.

The quartet manages to create a totally new sound, a kind of synthesis of centuries of spiritual music, but then brought with a clear look at the future possibilities of expression. Zikaron Lefanaj, indeed! Magnificent music.

i got this album based on this review and i am glad I did. but i am surprised it found its way into the Happy New Ears 2012 shortlist as there is way to much reference to the music of the balkans, music of the east to score high on the originality front in my book.

i felt the same with martin küchen's hellstorm.