It's been a bit since we've done this, but Paolo and Paul both could not help bursting into spontaneous prose on this new release from Paradoxical Frog... 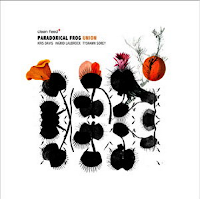 What a fascinating album! If you have the chance, as I did, to listen to it in a rainy day and with a pair of comfortable headphones you will be immediately catapulted and wrapped in a warm hug of long notes and dilated atmospheres, highly lyrical and dramatic, but never melancholic.

Every musician takes his time to distil few powerful notes. It’s just as if the three of them are there thinking a lot, waiting, feeling the right moment, searching the right approach to say something really important to their companions. And they succeed in doing this for the whole work. Kris Davis on piano chooses short, meaningful phrases. Ingrid Laubrock has a magnetic tone, whispered and mesmerizing. I’d say feminine, even not knowing she’s a woman.

Tyshawn Sorey impresses me. You perceive his monolithic presence. He can be silent for minutes and when his drumming arrives it is rhythm made flesh. Feel it in 'Second Strike'.

There are of course some more speedy episodes, as 'Fear the Fairy Dust', but the result is never frantic.
This is, among the trio releases I’ve been lately listening to, maybe the closest to a spoken conversation. I have no other words to describe it. They would.

If I am allowed to do that, I will steal two ways of saying from our Stef. 'Higly recommended' and 'this is jazz'!

Not so long ago at the MOMA in NYC there was a featured exhibition called "Stop, Repair, Prepare: Variations on “Ode to Joy” for a Prepared Piano." It was in a large open space of the museum, with stark white walls and high ceilings. In the middle of this space, there was a piano with a hole cut out of it just right for a human. At certain intervals a person would indeed emerge from inside the piano, reach forward and begin playing the keyboard while moving through the gallery.

When I first put on Paradoxical Frog's Union, this is pretty much what I imagined was happening. From a panoply of tones that you have to listen hard to attribute to their source, the playing begins from within the instruments, slowly reaching out and interacting with the space it's in.

Paradoxical Frog, in musical terms, is Kris Davis on piano, Ingrid Laubrock on tenor sax and Tyshawn Sorey on drums. Each brings a wonderful sense of tone, technical skills and compositions to the ensemble and this, their second release, is just fantastic. From the early formative sounds to the song snippets that emerge and dispel in their own time and space, the trio excels at creating music that is fresh and exciting while being warm and inviting -- if not also a bit challenging. Slower songs like 'Second Strike', a dark hued free-form melody stretching over washes of percussion and abstract comping contrasts beautifully with more upbeat and determined tunes like 'Union'. The combination of tempos and touch on 'Masterisk' makes for an exciting listen too.

Never unduly harsh, never overtly obviously, the songs unfold in their own lovely ways. The tones of Laubrock's sax, the splash of Sorey's cymbals and Davis' original and melodic playing come together so nicely here.


Take a look and listen: