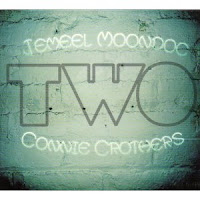 How many among us, when we sit down to listen a piece of, listen to the entire recording from which it came, from beginning to end, without interruption? As the answer is none among us, the question of “totality” and it's role in the construction, consumption and assessment of music takes on new gravity.

When is a recording a collection of songs to be shuffled at will and when is the over all functionality of the work dependent upon sequence?

Did Connie Crothers or Jameel Moondoc ask any of these questions during the manufacture of Two, or are those extra musical concerns for the listener to tease out?

There is an aural starkness, a blunt truthfulness on Two. Not a lot of sonic Vaseline rubbed on the mic to make it all sound dreamy. While that isn't a judgment and rarely something I notice what with my less than mediocre listening environment, it is something I noticed immediately with Two. Crothers' piano sounds more like the piano's I have personally known and less like Martha Argerich's Steinway or Matt Shipp's Fazioli. Again, that's not a judgment, just an undeniable aspect of the whole. The humanity revealed in Jameel Moondoc's sound by Two's high definition sonic ethos strikes me on a visceral level in a way that the recorded sound of Phil Woods on Billy Joel's Just The Way you Are does not.

Direct sonic access to these unmanaged sounds is an asset on Two. You Let Me Into Your Life is a Jazz tune, one you might hear sung on bent knee at the end of act II on (or off) Broadway. Yes, Crothers and Moondoc both impart a rich trove of musical materials and insights to You Let me into Your Life. Yes, Crothers' tart voicings and captivating harmonies combined with Moondoc's tonal range, from acrid to buttery, add depth and dimension to what would otherwise be a saccharine assault on innocent ears. Yet in the end, it is the hyper-revealing sound of the recording which ultimately imparts an element of interest to those well worn Tin Pan Alley progressions.

Which is simply to say You Let Me Into Your Life is no where near as captivating as the improvised pieces. The inclusion of that piece is a challenge to my assumptions about form with respect to the totality of Two; it must be there for an aesthetic reason, I just don't know nor can I feel what it is. The palpable feeling of phew, now that's out of the way, let's get down to business makes Two essential for those seeking an experiential understanding of what improvisation can offer that written, form bound music cannot. Not that one is better than the other, but until improvised music is seen as absolutely equal to written, “composed” music, (and by “seen” I mean funded) I'm here to say improvised music is better. Crother's and Moondoc, like so many musicians today, are far more interesting and dynamic without the yoke of familiar structures and song forms informing their choices.

I must confess this is my first exposure to Crothers' music. What is most attractive to me is the obscurity of her antecedents. With words, Crother's makes sure you know of her debt to Tristano. Sonically, there is additional debt to Cecil Taylor, Thelonious Monk and Andrew Hill. Certainly you'll hear others, though probably not any one clamouring atop the other. Whoever you hear, you will hear them assimilated by a consummate musician and wonderfully able operator of the instrument.

Moondoc intrigues for the same reason. While there is absolutely the influence and input of the great alto players of the day in his sound and approach—I know I hear some Jimmy Lyons—there is just as much skewing of the lineage through his own Moondoc's own invention. In a life devoted to “This Music,” Moondoc has given us a lasting reading of the alto saxophone's emotive power. Two is a reference point we can forever refer while, under the auspices of Art, continued reinventions of the horn lead it and us ever further into a barren wasteland of toneless exhalations and protracted silence.

Finally, in terms of totality, hearing Two within the context of the rest of the Relative Pitch recordings gives another value add to the listening experience. Kevin Reilly has thoughtfully curated a fascinating collection recordings which, taken together create a greater whole. Hearing Two juxtaposed against recordings like Golia's Take Your Time and Leandre and Greenleif's That Overt Object of Desire (or any of the Relative Pitch recordings for that matter) reminds us of the huge diversity within our relatively small and historically embattled creative ecosystem.