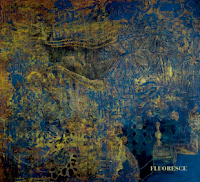 I was fortunate enough to see Spill a little while ago which allowed me a chance to see how this duo would create in front of an audience. These are the musical decisions that you can either live well by or die by, all in real time.

In this case, Magda Mayas (piano) had her back completely turned to drummer Tony Buck. He was facing the audience and she looked like she was performing to a dark corner of the tiny club. Armed with wires, bells, children's toys, back massagers and a whole host of other multi purposed everyday items and prepared piano materials, Spill amazed the small crowd with their percussive lyricism and intuitive conversation.

On the way out, with album in hand, I has a brief conversation with Mr. Buck about the overdubbing approach on their latest recording Fluoresce as the record credits piano, Tiger Organ, clavinet, objects, and preparations to Mayas and drums, cymbals, gong bells, tabla, and percussion to Buck. The question that was begging to be answered was just how different these two approaches would be.

"Steel Tide" opens the recording, the first of four lengthy extended improvisations. Mayas sets out to be just as percussive as Buck as she taps the wood of the piano. Buck begins with bells in what is the first rain drops of the eventual waterfall of percussive effects that just keep building as the track progresses. Mayas soon gets to what she does best, coaxing unexpected sounds from her prepared piano. She explores her sound utopia as well as even playing the occasional untampered key, which does sound odd after awhile.

There is something very addictive to what they are doing. They create a need for more and   skillfully, they deliver. This is what makes the recording so appealing and so different from the live experience. With the introduction of overdubs, the limitations of the musicians limbs are no longer there, and the soundscape becomes endless. It is an excavation of sound where Buck digs deep into his bag of tricks to be every bit as polyphonic as Mayas who in turn is walking through her own sound forest carrying a very large hatchet.

The longest piece on Fluoresce is 'Coalesce', and even thought it is 24 minutes long, it feels much shorter than that. It ranges everywhere between someone breathing down your neck and fighting woodpeckers combined with an ever present grinding that is a warning that if you get too close, you could lose your fingers. Compelling indeed.

If anything, Fluoresce is a wonderful exploration in molding an improvisation in a studio setting. Once the first coat of paint is on the canvas, you can either paint over it or keep adding to it. The trick is sometimes knowing when to stop, as this duo is clearly aware.

Can be purchased from the label.

From the afternoon set in Singapore in a different venue: