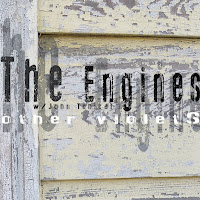 
Unfortunately we lost one of the great innovators in the free jazz world in October 8, 2012. John Tchicai had been a face on the scene for many years, although sadly for many he was often just remembered as the man who played on John Coltrane's Ascension  along with other saxophone greats Marion Brown, Archie Shepp and Pharoah Sanders. In reality he made many great records that were quite easily accessible, yet remained firmly committed to the art of music and freedom of expression. One of my favourites is 'Satisfaction' with bassist Vitold Rek where Tchicai not only played some sublime saxophone and bass clarinet but also recited some of his poems to great effect. Somehow I guess for me he wasn't a free-jazzer, just someone who had a large palette of sounds and was open to playing in all musical situations.

So it's a welcome return to hear The Engines featuring John Tchicai on one of his last recordings. It's also a chance to hear John Tchicai in the very capable company of these great players, also a real band that's been in existence since 2008. For all that don't know 'The Engines' it's a group made up of Dave Rempis (saxes), Jeb Bishop (trombone), Nate McBride (bass) and Tim Daisy (drums). The music, which isn't much different in style from earlier albums, is post Ornette meets Mingus meets the Vandermark 5 .... which isn't surprising as they (Daisy, Rempis and Bishop) were part of the Vandermark 5! Their compositions are often mini-suites which develop throughout a piece taking the soloists into new areas where they are required to develop ideas that lead towards the next sections, hence the Mingus connection. Furthermore that means the music is very organic, the themes are small gems of development in melody and rhythm.

It's great to see that Tchicai isn't used as a 'featured' soloist, but as a true member of the band. He blends perfectly into the working sound of the group, so well you'd imagine that he'd always been part of that ensemble. As on all 'Engines' releases it's a co-operative effort with compositions from all members, and the same applies here with Tchicai adding two tunes to the bands repertoire. On tunes like the opening 'High and Low/Strafe' or 'Cool Copy/Looking' (tk3) Tchicai plays like a Dewey Redman, blowing bluesy growling lines over swinging free-bop. He duets on flute with Jeb Bishop on the beginning of his own 'Super Orgasmic Life' (tk4), but the main point of this group is being 'a group', and soloists come and go like trains in a station bringing new ideas and then leaving to make space for others, everything seemingly timed perfectly. The energy of the group is as always top notch, helped by the live recording (*) to inspire creativity, focus and direction for the group and each player. The glorious 'Gloxinia' (tk2) drifts over rubato rhythms which dance away with great energy giving the soloists a stormy ride clearly inspires them. Dave Rempis blows up a storm on his saxes on several of the pieces, often reminding me of Thomas Chapin mixed with Ornette. It seems that he takes fewer solos than normal on this recording leaving more space for John Tchicai. Tim Daisy is a marvel as always showing (for me) that he is one of best kept secrets in the history of the drums! Always creative with bassist McBride these two are certainly part of the success of this group, constantly full of energy and new ideas.

A highly recommended album for fans of the Chicago jazz scene, free-bop, Mingus, melody and swing.

(*)= I think most of their albums have been based on live recordings.

As far as I know, Nate McBride never was a member of the vandermark 5 (ven though he played with the leader in other contexts) and Bishop was replaced by Lonberg-Holm for the last few albums. On top of that: the Vandermark 5 was (unfortunately) disbanded a couple of years ago.

Sorry Guy, I didn't mean all of the group. I must of left out that sentence when writing, it's corrected now.

Thanks for bringing my notice to it.