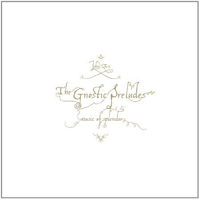 Last week I had a strange but beautiful dream: I was standing on a high cliff and I was looking down on the sea which was smooth as glass. I jumped into the water and stayed there for almost an hour (without any air tank) and swam with sea horses, clown fish, moorish idols, symphysodons, and Mandarinfish which treated me as their playfellow. The water itself was sparkling and of an unnatural green and blue as if I was in a natural whirlpool. It was the most perfect utopia I ever dreamed of (although I know it sounds cheesy) and the whole time I heard the shimmering music of “The Gnostic Preludes”.

From the first chords, notes, flageolets and arpeggios of the first track “The Middle Pillars”
Played by Bill Frisell (g) the music already caresses my ears blissfully before the other instruments drop in (Carol Emanuel on harp and Kenny Wollesen on vibes and bells). John Zorn’s compositions  process all kinds of influences from medieval melodies and Steve Reich’s minimalism (“Music of the Spheres) to Frisell’s own Americana excursions (“The Book of Pleasure”) and exquisite pop and blues (“Diatesseron”), actually all the instruments are interwoven in a delicate architecture of harmony and the rather unusual combination of them creates an atmosphere of the utmost beauty.

In contrast to earlier albums John Zorn’s role in many of his latest releases is mainly that of a composer, he has hardly appeared as an instrumentalist recently. Instead he chooses master musicians to play his pieces, obviously encouraging them to be not just obedient interpreters, but also independent improvisers.

Zorn draws his inspiration from philosophical sources as different as the ideas the Kabbalah, natural mysticism or – obviously in this case – Gnosticism, which might have been a reason to establish his series of 21st century mystical music. “The Gnostic Preludes” tries to integrate all these spiritual influences in a musical way.

Listen to “The Middle Pillars”: