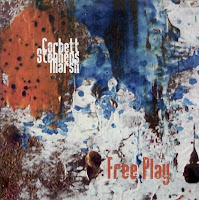 You put on the record and you know you're in the British free improv scene, with sounds that bounce against each other, erupting and surfacing like lava bubbles in the hottest possible environment as a kind of state, visible, approachable, almost intimate, still far away from the effects and the dynamics of the whole volcano exploding.

The state is now, the music is now : notes skittering away, bustling, fluttering, trembling, vibrating, shimmering in short bursts, coming up, boiling with expression, disappearing and reappearing in a great physical tour-de-force of nervous and agitated energy, like the crazy clots of paints on a Pollock canvas, all expressivity and colorful power.

The trio at work here are the masters of the art, with Jon Corbett on trumpet, valve trombone, bamboo flute and conch shell, Nick Stephens on bass, and the late Tony Marsh on percussion. The album is a tribute to the drummer who passed away now almost a year ago. The performance itself dates from 2010.