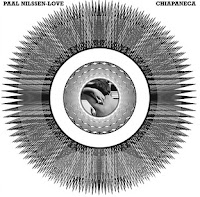 Warning – Reality can be really different from my imagination.

As usual, when I have a Paal Nilssen-Love solo album in my hands, I have great expectations about it. And as usual, listening to it, I notice how he achieves to capitalize on all the sonic possibilities of his instrument. In the first half he moves “more traditionally” (don’t believe me!) among dense passages on snare drum igniting the fire with powerful hits on the bass drum and on the other skins. He always balances eruptive moments with more quiet variations as when he starts playing with the vibrations resulting from a bell and the rhythmic pattern given by the obsessive percussion of an object I can’t identity. This very same element – that throws us on the second side – evolves in an intricate and frantic hammering on all the skins of the kit. This is the majestic rock side of Nilssen-Love. But he likes to move also in really sparse, ethereal atmospheres, so we fall back in a “cymbals moment”, where he takes advantages of all the resonances, hisses and vibrations of scraping metal surfaces. Then there is still one more eruption to go.

My perception and judgment of the album is considerably influenced by the low quality of the recording. Especially in the very first minutes of side A, the sound is rather flat and muffled. Luckily it seems there is some fine-tuning along the way.

The concert has been recorded during the Festival El Nicho Aural at Centro Cultural España in Mexico City on the 12th of May. It’s released with a commendable seventies-like cover art just on vinyl by Bocian Records that made also available some excerpts on its website.