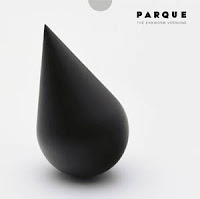 I’m hoping The Earworm Versions will garner a little more international attention for Ricardo Jacinto, the Portuguese polymath behind the music of Parque. Jacinto’s a cellist, but his resume stretches on: a student of architecture and sculpture, he combines sound installations, visual performances, and improvised music into colossal vortices of art. Even without the visual/physical element, The Earworm Versions is an impressive piece of music, certainly worthy to stand aside the names of fellow architects of sound like Max Eastley or Eli Keszler.

The Earworm Versions features three performances. The first is a piece for cello, alto saxophone, electronics, and percussion played on two giant, suspended mirrors. “Peça de Embalar” is austere and moody, the cello drawing long tones over the timpani-like mirrors, sounds like thunder rising in the distance. “Os” features a similar instrumental line-up, only with 24 smaller, tuned mirrors that hang vertically from wires on the ceiling like cymbals.  The piece is interspersed with some readings from a sci-fi text (nothing special, but not terrible, either), which despite its strange subject matter represents the least interesting aural element at play. Still, at times the words and the sounds converge keenly. “It’s also fantastically cold,” says the voice early in the piece, and the low sound of the saxophone starts to lift, a sound almost like shivering, and then the delicate clatter of the mirrors, hammered like dulcimers, an orchestra of ice.

“Atraso” rounds out the selections, an improvisation that’s played back through a speaker on a pendulum, which is swung around a room by two performers, creating a disorienting Doppler effect that sounds as though the music is swooping and diving around your head. What sounds gimmicky on paper actually creates a compelling pulse in the music, a slippery rhythmic element that’s hard to pin down but proves to be the driving force behind the music.

There may be a debate to be had about divorcing these pieces from the structural and visual elements that make up their conceptual foundation, but the works can stand on the strength of the sounds alone. I’d like to think the performative and audio elements can serve two distinct functions and audiences (not mutually exclusive), rather than one being a lesser, incomplete version of the other. Either way, The Earworm Versions is lively listening, and a welcome edition to Sshpuma’s burgeoning little catalog.

Check out Jacinto’s site for video footage of the pieces featured on The Earworm Versions (be patient—for some reason they include the audience arriving and taking seats, too), and poke around some of his other installations while you’re there.