Weekend Round Up: Tzadik 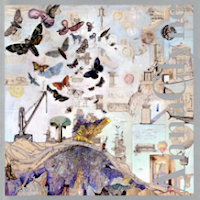 Let’s start with one of last year’s best Tzadik releases (my favorite still is Ned Rothenberg’s World of Odd Harmonics): Anna Clyne’s “Blue Moth”. Although heaped on with prizes (she is composer-in-residence with the Chicago Symphony Orchestra), this is the first album exclusively with Clyne’s own music. Her electro-acoustic compositions juxtapose pre-recorded tape sequences with solo instruments or bigger ensembles which generates highly diverse effects from emotional dramatic gesture (“Beauty”) to utter dismay (“Rapture). The first piece, “Fits + Starts”, already displays Clyne’s outstanding talent, it is a ballet piece mixing cello pizzicato patterns, harpsichord color spots, viola echoes, and Clyne’s own backing cello. The result sounds like a Danny Elfman composition on speed before a short quotation of John Cale’s “Paris 1919” turns it into an almost romantic soundscape. “Rapture” (2005) and “Choke” (2004) are written for clarinetist Eileen Mack (her clarinet sounds like an electric guitar) and baritone sax player Argeo Ascani, whose instruments are attacked by whirlwinds of distorted electronics which has – in spite of its brutality - a strange but beautiful effect.

Highlights of the album are the 14-minute “Steelworks”, which combines speech samples with woodwinds and percussion and which is based on minimal Steve-Reich-like structures (like all the other composition this one has obvious soundtrack reminiscences, you cannot help creating your own pictures of a 19th century steel mill in your head) and “Beauty”, which concludes this collection and in which another tape recording reprimands us to “beware of beauty, to look beyond the fluttering wings, beyond the relentless display, beyond the upheaval”.  But what you find there is just another kind of beauty, it is only distorted. 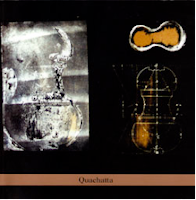 Not being familiar with Judaism or the Kabbalah, I have to quote Rabbi Yitzhak Ginsberg (“The Hebrew Letters”) here who says that the circular form of the letter samech symbolized the fundamental truth representing infinity, because it had no beginning or end. This realization and awareness of inherent unity between beginning and end was in fact the manifestation of God's Transcendent Light.
Samech (the Polish quartet) consists of three strings - Anna Ostachowska (viola), Magdalena Pluta (cello) and Marek Lewandowski (double bass) – and percussion (Robert Sztorc on percussion) and this release belongs to John Zorn’s Radical Jewish Culture series. Musically close to Masada String Trio or the fabulous Bester Quartet they combine rock structures with classical music and Jewish folk which makes up a very interesting mixture. As to sound you can also find allusions to Kronos Quartet’s “Pieces of Africa” because of the music’s strong rhythmic and dynamic drive. The result is very accessible, melodic and exciting.

Listen to “Kwisz Mahir”, the first (and beautiful) song of the album here: 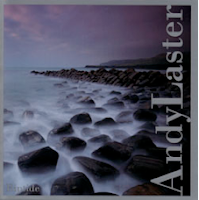 Andy Laster has been known as a jazz saxophonist so far but this album is his first with neo-classical chamber music only and on which he participates “just” as a composer and not as an instrumentalist. Therefore Laster has gathered first class Tzadik musicians like Erik Friedlander on cello or Kermit Driscoll on bass. The music on the album includes program music like the solo piano piece “Riptide”, which is trying to represent a man’s feeling when he is caught by such an undercurrent, or what Laster calls “structured improvisation” as in “Genk”, where the musicians are allowed to contribute own elements beyond the given notated parts. Most tracks are nice contemporary classical studies (e.g. the two “String Trios”) although not all the compositions can keep me at it. Despite its complexity and great musicianship this album sometimes lacks fascinating ideas compared to Anna Clyne’s approach, for example.

You can listen to some of the tracks on his website: http://andylaster.com/ 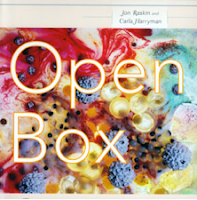 “Open Box”, a project of poet Carla Harryman and saxophonist Jon Raskin, starts with bone-dry heavy metal guitars reminding me of a hard rock version of Sonic Youth, even Carla Harryman’s “rap” resembles Kim Gordon. “Fish Speech”, the first song, depicts a world at the very beginning, enumerating what did not exist then and alluding to what that might mean. It is a very promising start both in its rawness and its hardcore DIY attitude, and the Tzadik website says that the music should be ”as radical as the writing, the music is brilliantly arranged, and interacts with the texts in a variety of dynamic ways”.  Unfortunately, it is not. The title pieces sound like random weird noise, structure is sometimes hard to discern, the vocals are partly incomprehensible and partly simultaneous (something I have problems with in some direction theater productions as well) -, the whole thing comes like a failed, artsy-fartsy video installation, a mere mind game. Other songs sound like a muezzin’s voice alienated and distorted by sound effects, some combine ethereal voices with electronics and free jazz sax, some are  incoherent sound collages. The last track comes back to jazzcore again, and you wish the whole album had these energy and guts. This sounds really harsh and actually I don’t want to blame the artists (Harryman is a nice poet), maybe I simply do not get it, or maybe it works live. On CD it’s just not my cup of tea.