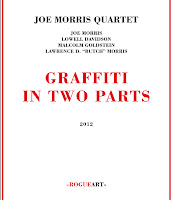 One of my preferred albums of last year, and one that has been haunting for a while, and I have blamed myself more than once that I still had  not reviewed it yet. The thing is : the music on this album is hard to grasp and hard to describe, but more than worth looking for.

The album brings a live performance from 1985 with Joe Morris on guitar and banjo-uke, Malcolm Goldstein on violin, Butch Morris on cornet and Lowell Davidson on aluminum acoustic bass and drums.

At first listen, this is free improv in the best European sense of the word, with sounds colliding out of the acoustic instruments, in a very granular fashion, like stones raining on industrial machinery, like rain dropping like stones, even if it sounds weird at first, some rhythm emerges on plucked violin strings, or on the banjo-uke. Once in while the granular, and often mesmerising sound gets a prolongation by bowed violin or long moaning tones on the cornet.

To my ears, the end result is of a devastating sadness, like small and vulnerable beings conversing about the woes that befell them, expressing feelings that defy storytelling and language whatsoever, yet the sounds produced reveal something more, undefinable and strange. The second track has more wailing sounds, with Davidson picking up his aluminum acoustic bass, the mesmerising percussive sounds are still there, yet are complemented with wave-like movements coming from cornet and violin, resulting in a longitudinal version of the first track.

The thing is : it is magical. All four musicians continue this hypnotising interaction for twice thiry minutes without any repetitive elements or phrasing while also staying extremely close to an almost primitive single tone persistance. Emphases change, volume changes, instruments change, yet the plucking and plocking goes on, captivating and beautifully. It's magical because all four musicians move as one, creating a unique sound, one that sounds familiar like everyday objects while at the same time revealing some deeper unfathomable things. As I said, hard to describe. I can only recommend that you try it out for yourself, if you have open ears.

Again, we can only applaud RogueArt for releasing this music after so many years.