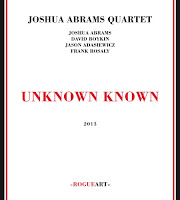 RogueArt continues its Chicago jazz love affair with Unknown Known, a quartet featuring Josh Abrams on bass, David Boykin on tenor sax, Jason Adasiewicz on vibes, and Frank Rosaly on drums. In many ways, Unknown Known sticks to those Chicago roots: even it its wilder flights, it always has a foot planted in composition and structure. It’s jazz that comes up under the tutelage of the AACM, which constantly pushed boundaries without ever entirely dispensing with them.

Though Abrams is billed as the leader, Adasiewicz tends to be the dominant voice (as with many projects he’s involved with). This isn’t a bad thing. Personally, I can’t get enough of his enormous, pulsing field of overtones. A 2011 New York Times article touched upon a lot of what makes his sound unique: hitting the instrument hard, frequent use of the sustain pedal, an interest in creating distorted, almost feedback-like effects, and keeping the sound of the vibes consistently in the mix, “rumbl[ing] along with the rhythm section.”

The downside to Adasiewicz’s colossal harmonic artifice is that it needs to be well-miked and recorded, and in its more frenzied moments, Unknown Known can leave a bit to be desired. At times, Abrams’ bass is nearly subsumed in waves of vibraphone and cymbals. Thankfully, he pushes through loud and clear when it’s time to rein everyone back in, laying out strutting basslines that snap everything back into focus.

There are some great tracks here, such as the funky “Settle Down” and the epic “Boom Goes the Moon,” but many seem cast of a similar mold, progressing from laid-back theme to building tension to out-and-out free improv and back again.  I wish more of it could be as arresting as the first four minutes of “Leavening,” a great, moody bass solo over slow, tribal drums and gentle swells of vibes and sax.  Boykin has a robust tone on tenor, but he feels under-utilized. He does have a handful of intense moments on the frontline, but it’s hard to compete with the sheer density of Adasiewicz and Rosaly.

Unknown Known is another solid release from RogueArt, and another reminder that the Midwest continues to be fertile ground for outsider jazz.

This record is frustrating because of the way it's been recorded. Boykin is too low in the mix relative to the drums and vibes. I still like it, though, and the tracks move through different stages in interesting ways.