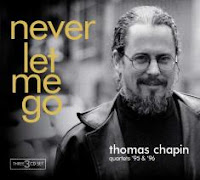 It was with a great deal of anticipation that I first found out about this release several months ago, as Thomas Chapin has long been one of my heroes on the alto sax.  He was a fixture of the New York “downtown” scene during the late ‘80s and ‘90s, working alongside folks like Mario Pavone and Michael Sarin (his frequentr partners in a trio format that often brought out Chapin’s most inspired music), and occasionally others (such as John Zorn, Tom Harrell, or Mark Feldman).  He helped get the Knitting Factory off the ground with his many appearances there in the 1990s, and indeed the Knitting Factory label ended up releasing much of his output (helpfully compiled in an astonishing 8-disc set, Alive, which is still sporadically available).  What never changed, no matter whom he was working with, was a relentless spirit of creativity and adventure, all the while staying firmly rooted in the jazz tradition—a quality that is rather rare among those typically categorized as “avant-garde.”

After all, Chapin got his first big break in the early ‘80s when he was selected as musical director of the Lionel Hampton big band (by Hampton himself, no less).  Although Chapin would eventually move into much more boundary-expanding projects, he never lost sight of his jazz origins, and in this sense is very much like David Murray, whose passion for and dedication to the jazz tradition has always defined his work—even his more “out”-leaning recordings.  While Chapin was sadly taken from us after he lost his battle with leukemia in 1998 at the too-young age of 40, we are fortunate in that his music lives on—and indeed, that new documents of his greatness continue to emerge.

These recordings are a fantastic example.  Playscape, a little label devoted to a select range of improvisers including Pavone, Michael Musillami, and Peter Madsen, has scored a tremendous hit by offering this glimpse of Chapin in the last couple years of his life, from live recordings essentially found in the family vaults.  In contrast to his most storied work with Pavone and Sarin, here we get to hear Chapin playing in a quartet format.  The first two discs have him partnered with pianist Madsen, Kiyoto Fujiwara (on bass) and Reggie Nicholson (on drums).  Disc three was actually recorded at his very last live performance (fittingly, at the Knitting Factory) in December of 1996, featuring Madsen once again, but this time with Scott Colley on bass and Matt Wilson on drums.

And the music?  Well, it’s simply wonderful.  Chapin’s prodigious technique on not only alto sax but also soprano sax and flute is abundantly evident, as he gets plenty of room on these expansive tracks to stretch out; each disc contains five pieces, and most run at least ten minutes, some much longer than that, the only exception being a powerfully compact and poignant reading of Monk’s “Ugly Beauty” featuring just Chapin and Madsen, on disc 2.  Otherwise, the best way to describe these tracks is as masterfully performed post-bop, with musicians who know each other well enough and who share enough collective confidence to take the music in interesting and surprising directions.  Indeed, I’ve found myself going back again and again to this music over the last several weeks, continuously finding new elements in the music to appreciate and marvel at.

The first two discs are the more straightahead ones, relatively speaking; the material is more standards-based, including a couple from Monk (“Red Cross,” in addition to “Ugly Beauty”), Artie Shaw (“Moonray”), and even Jimmy Webb (“Wichita Lineman”)—and the chief pleasure in spending time with these tracks is just to hear Chapin’s incessant exploration and tireless invention.  His solos are remarkably free of cliché, as he somehow manages to find new things to say with each phrase.  Even Webb’s rather syrupy tune is given new life and vitality under Chapin’s thoughtful care.  Madsen is especially vital in supporting Chapin throughout; rather than limiting or confining his options, Madsen’s punchy and rhythmic contributions work consistently to prod Chapin further, seemingly giving him more energy and dynamism as the music unfolds.  Fujiwara and Nicholson are also rock-solid throughout, keeping the music anchored while also being able and willing to adapt to whatever direction Chapin wants to take the music.

When we get to the third disc, we encounter the freer side of Chapin’s playing, as the change in personnel with Colley and Wilson taking over the bass and drum duties seems to liberate Chapin, along with the choice of material.  Here four of the five tracks are Chapin’s own, including “Whirlygig,” which features some terrific off-kilter rhythmic flourishes, and “Sky Piece,” one of Chapin’s most notable compositions.  Overall, the music on this disc is more unsettled and edgy, with Colley and Wilson clearly being willing to push the music harder and take more chances, which leads Chapin to pursue riskier explorations.

All told, this is simply marvelous jazz music.  Chapin’s willingness to forge connections between the traditional and avant-garde jazz camps, and to explore the beauty within each, should earn him his distinctive place in the history of this music—and this release will certainly help him do that.

In addition to the great value of these recordings, there is also a film project underway to celebrate Chapin’s life and music.

What a nice review, Troy. Me and a friend of mine, who plays the saxophone, have always been fans of Chapin (he all the more being able to worship his incredible technique). My favorite Chapins are the duo record "Crossing Points" with William Hooker and the Trio album "Anima". It is interesting to hear him play more traditional stuff here (although I prefer the freer stuff), and I especially like "Wichita Lineman" ;-).

Thanks, Martin. I've been listening a lot to "Anima" myself lately--it's definitely one of Chapin's best!

I haven't bought it yet, but Monk doesn't have a composition called Red Cross. He does have one called Criss-Cross.

I haven't bought it yet, but Monk doesn't have a composition called Red Cross. He does have one called Criss-Cross.

Hi, I am making the film about Thomas Chapin and hope you will all check out the film's website at www.thomaschapinfilm.com. There's a new 7 min. trailer and other news. For recent updates, LIKE my film's fan page at www.facebook.com/thomaschapinfilm

Thanks for being among his fans. Thanks Troy, a great review!!

Hi, my name is Heidi from Belgium. I knew Thomas when he came to Belgium with Lionel Hamptaon ( friend of my uncle ).
In those days, about 31 years ago, 1983, he gave me a tape to listen to. A complete new kind of music he composed. Now it is very known. The title " forgotten game"
I still have it and would like sell it to someone who loves the music.
I have the memories of our conversations.
If there is anyone interested you can contact me at : gnc@telenet.be
Best regards