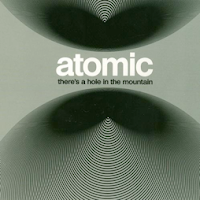 There is no doubt that Atomic are a great jazz band. Yet, I had difficulties writing about their album. Should I refer to the title and/or the titles of the single tracks? Is there a common theme, either musically or thematically? Is there something personal I could refer to like a certain live experience (I saw them once)? As you can see, starting the review was a problem. I wouldn’t call it writer’s block but somehow I was stuck. I even considered just describing the music but when I was at the Moers festival with my friend Christoph he reminded me that this is something I didn’t have to do and he came up with this Günter “Baby” Sommer quotation that “describing music is like story-telling a meal”.

When I write about music I am always very subjective and very personal, I write about the things I like. And of course I like Atomic. I like their long time cooperation (this is their 12th album since 2001), I like listening to the small changes they have made during their existence (check out Bikini Tapes for that), I like Håvard Wiik’s unpretentious but precise way of playing the piano, I like Magnus Broo’s (tp) and Fredrik Ljungkvist’s (sax) arrow-like and razor-sharp unison riffs, and I like Ingebrigt Håker Flaten and Paal Nilssen-Love as a rhythm machine just because they are my favorite European rhythm machine.

As to their music the French critic François Couture claimed that Atomic was founded as a reaction to the very smooth Scandinavian bands released on ECM (like Jan Garbarek, Nils Petter Molvær or Bobo Stenson). In contrast to the really ethereal and hyper-clean ECM sound Atomic’s approach is rather enrooted in the American bop and cool era and the European free jazz movement of the 1960s as well, something they combine in a very tense and tight way.

You can see this in a track like “Civilon”. It displays this kind of Miles-Davis-Ascenseur-pour-l'échafaud-atmosphere (the faster tracks, of course), but in their typical Atomic way the whole piece makes a U-turn to something that reminds more of Archie Shepp’s Fire Music, it completely falls apart before the band picks up the pieces again (or actually what’s left of them). It works similarly with “Available Exits”, just replace the Miles Davis theme by a hard bop staccato line. There are a lot of styles present on the album, though. The title track and “Wolf-Cage” include classical and/or klezmer elements to the brew which makes me think of Arnold Schönberg, Lennie Tristano, Ornette Coleman and John Zorn on a night out, getting loaded on some bottles of Pinot Noir, before they start composing all together simultaneously.

This whole thing is full of energy and funny and sometimes even breathtaking.

But I realize that I describe the music again. I don’t know what else to do. Maybe I whetted somebody’ appetite.

Thanks for the review. Yes, I am also a big Atomic fan, although I haven't got round to listening to this one yet. The music as you say is not easy to describe. I tend to call it 'melodic/improvised', working from themes, but with a free form direction.

I also saw them just a month ago which was fun, but I'd say lacking in something, energy maybe? It was the tunes from this album, and a few of the classic favourites.

Unfortunately the "Bikini Tapes" is out of print, and is certainly their best record(s) to date. I also like the "Retrograde" album which really is packed with excellent music, probably second best to "Bikini Tapes", and still available I think.

Another group which I find well worth checking out - we reviewed an album or two here - is Motif, something similar, but I guess you already know them?

On a more present day mode I find that Liebman and Eskelin are (kind of) doing something similar and very nice it is to.Their third most recent album is really fine.

Thanks again for the review.

Dear Joe,
thanks for the nice words, I really appreciate them. And I must admit that I know Motif only from hearsay, which is definitely an eductional gap I have to close. Bikini Tapes is out of print on CD on Jazzland but still available on vinyl on NoBusiness.

I'm not sure they (Exploding Customer) are the standard-bearers of this type of music, but I see your comparison. Too add to it Martin Küchen always has something interesting to play/say!

Or once could purchase a download of The Bikini Tapes at bandcamp... http://atomicjazz.bandcamp.com/album/bikini-tapes? Just saying.

Nice idea, I hadn't thought about that. I already have a copy so I didn't look into it. As Martin said you can still buy it on Vinyl also.